Today I selected a paper on IPSCs by Miura et al from PLOS ONE on direct transplantation in diaphragm in mice. Doi 10.1371/journal.pone.0266391.

Stem cell transplantation is one of the therapies in development for Duchenne. Initially muscle stem cells (activated satellite cells, myoblasts) were selected but these posed challenges: they have a limited proliferation capacity and they do not distribute well after injection.

Immortalized myoblasts or induced pluripotent stem cells (IPSC) differentiated into muscle progenitor cells would be sources that allow production of larger numbers of cells. However, also these do not home to muscle after systemic injection.

Here authors focus on local treatment (direct injection of muscle). Given that in mice the diaphragm is severely affected and that Duchenne patients often succumb to respiratory problems, they aimed to inject the muscle cells into the diaphragm.

They started with primary muscle cells – they transplanted into immunocompromised my so they could inject human cells without having to suppress the immune system. Direct injection of primary cells resulted in engraftment but was not that efficient. 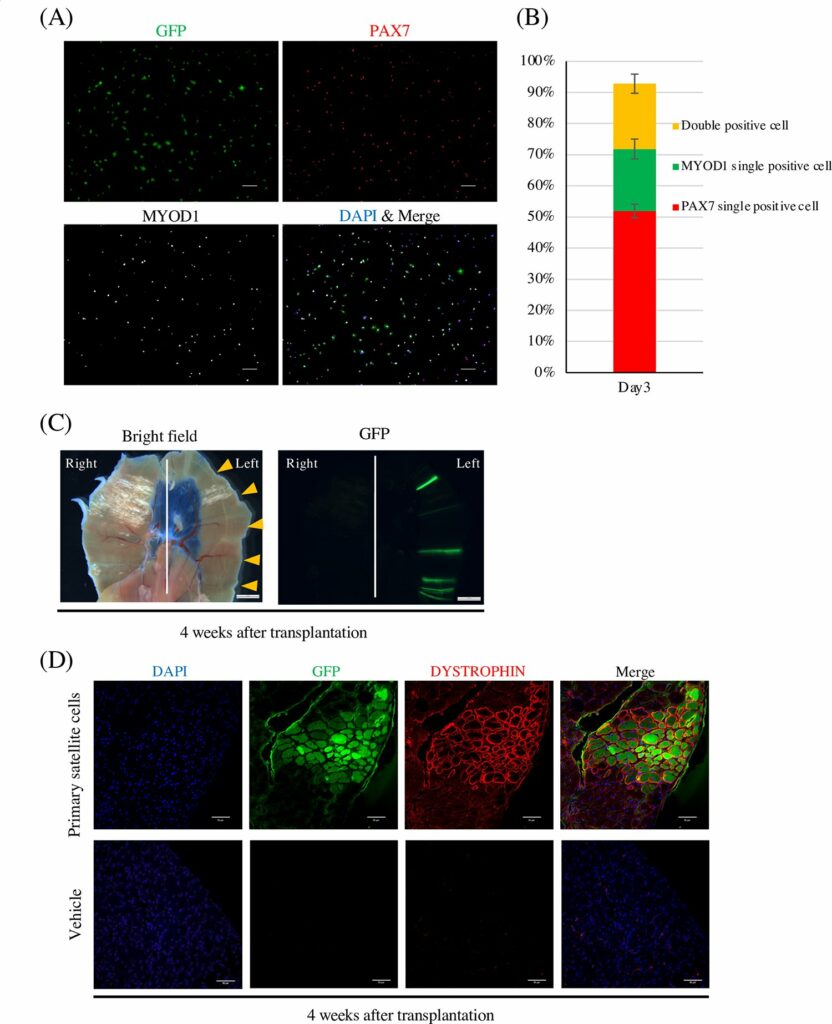 Authors then tested immortalized human myoblasts (i.e. this is not the same as IPSCs differentiated to muscle stem cells, but primary muscle cells that were immortalized – the origin is different). Local injection of these cells to the diaphragm was very inefficient.

To improve engraftment, authors mixed the cells with polymers containing gelatin and hyaluronic acid (yes the stuff that is also in skin creams) or alginate (a gel isolated from seaweed). Both improved engraftment slightly but alginate prohibited migration of stem cells.

Authors did the polymer test in tibialis anterior for optimization. They then used IPSCs differentiated into muscle stem cells with polymers in diaphragm with direct injection. Efficiency is still quite poor – note that they count the number of human cells per cross section. 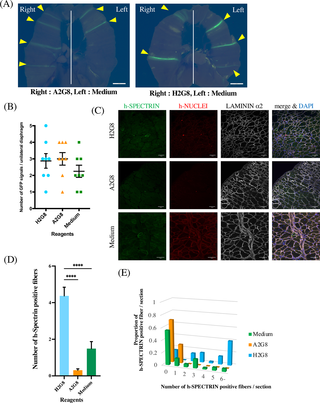 Authors discuss reasons for the poor efficiency: the diaphragm is a very thin sheet of cells that continuously is moving (respiratory rate of mice is 150-200 per minute!). They indicate that more optimization is needed to improve engraftment.

What they do not say: is this procedure feasible in humans? It seems very invasive…Also the diaphragm of patients is of course much larger so likely a single injection is not enough. Other things to consider: this would require chronic immune suppression.

Finally, while the diaphragm plays an important role in breathing, other muscles play a role as well, so even if this were very effective it would not fully restore respiratory function decline for Duchenne.