It is very important that compounds are tested thoroughly before initiating a clinical trial. This is done firstly to assess whether the proposed mechanism works (proof-of-concept). If it does, additional tests are needed to ensure optimal trials can be designed.

There are several steps in therapy development. After discovery, candidate compounds are first tested in cell models, thereafter in animal models and in the end in humans in clinical trials. Cell and animal models are very important to show proof-of-concept (i.e. does it work in a model system?). It should be stressed that success early on is no guarantee for success in subsequent steps. 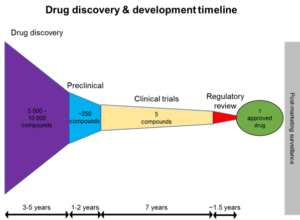