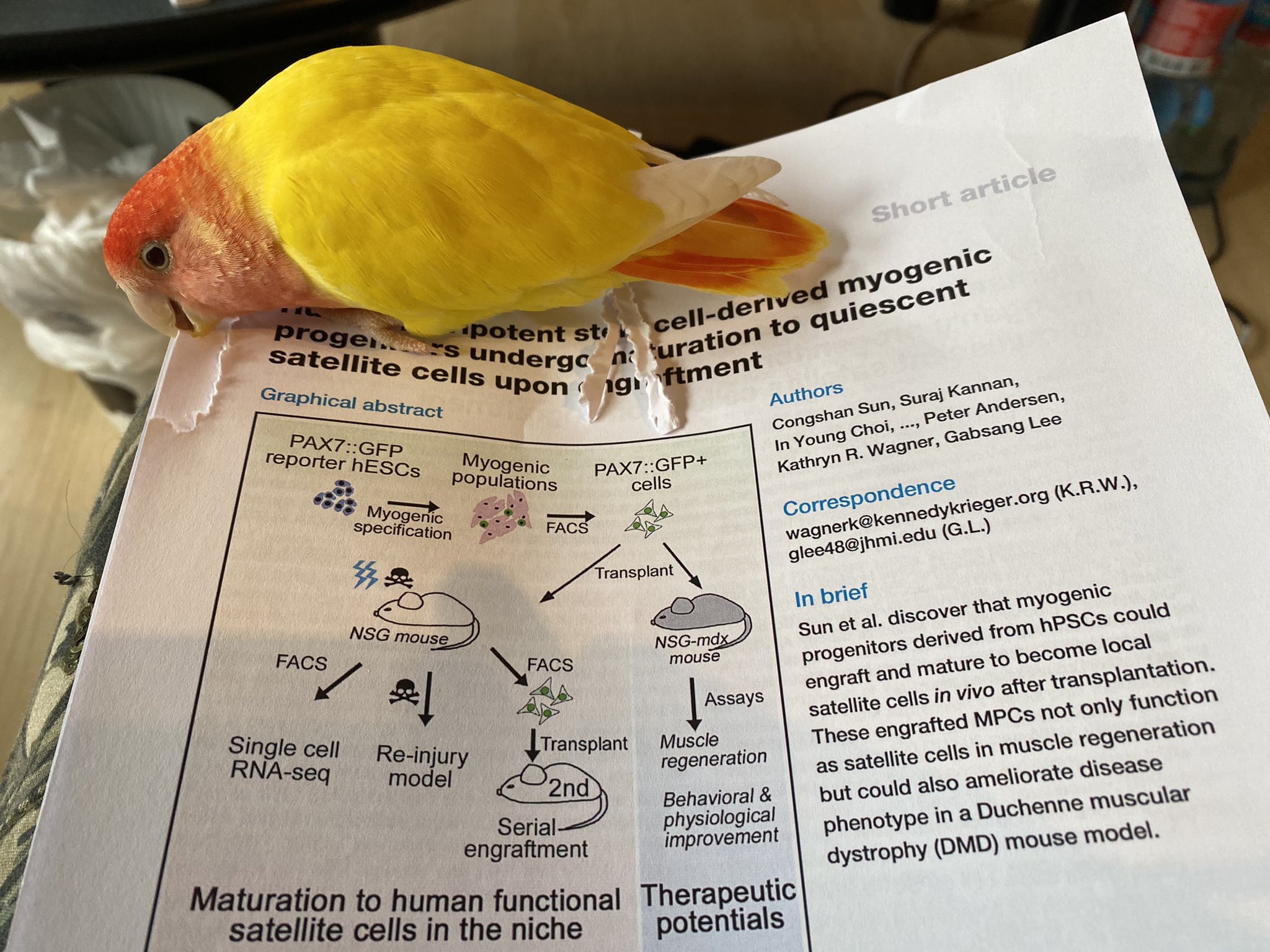 Satellite cells are muscle stem cells that lay on top of muscle fibers. Normally they are quiescent but when skeletal muscle is damaged, they are activated, will start proliferating and home to the damage to repair it and form new fibers. A few cells will go back to quiescent.

Satellite cells have been considered as a tool for stem cell transplantation for muscle diseases. However, there are several challenges for this. Only a limited number of satellite cells can be isolated from muscle tissue and these then need to proliferate in a culture dish.

Thus these satellite cells are active and not quiescent. Furthermore, this proliferation capacity is limited, as is the source of healthy stem cells (requires a muscle biopsy – if you need more literally an arm and a leg). Finally, immune suppression is needed transplanting them.

Isolating stem cells from a patient and then correcting the genetic defect in a dish and transplanting them back would avoid the immune suppression part. However, still this is challenging due to the limited proliferation capacity of satellite cells in a culture dish.

Induced pluripotent stem cells (IPSCs) can be generated from fibroblasts (skin biopsy). These can proliferate indefinitely, and then differentiated into different cell types, such as the muscle progenitor cell. Here authors tried to study such cells in mice.

To allow tracking they placed a GFP marker in the Pax7 gene (expressed in satellite cells). Thus all satellite cells are green. After culturing and expanding they managed to get ~30% of green cells from the IPSC cultures. These cells differentiated into muscle in culture dishes.

Authors isolated the green cells with FACS sorting. Then they transplanted them into the tibialis anterior (TA) muscle of a mouse that was irradiated (to remove existing satellite cells) and injured (to activate the transplanted cells into repair). 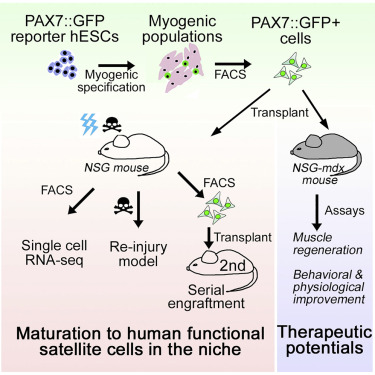 This resulted in repaired muscle fibers but authors also detected some quiescent cells, suggesting the cells did not only repair but also would facilitate future damage repair. The amount of these cells was very low though.Authors isolated the stem cells from the transplanted muscle & performed single cell sequencing to identify expression profiles. These suggested indeed some of the cells were quiescent. Notably, this did not happen when cells were cultured in the dish, only after transplantation.

Authors showed that if they damaged the transplanted muscles a second time the quiescent cells became activated and repaired the damage. Finally, authors transplanted the cells into an mdx4cv mouse model for Duchenne. Here they did not irradiate or injure before transplantation.

Authors observed dystrophin in locally treated muscles (TA, gastrocnemius and quadriceps), albeit at low levels. They also showed longer running times (panel M). However, you will notice a lot of variation between mice and very small groups (N=4-5).

Authors indeed discuss that the limitation of the current study is the scale. They aim to continue the work in larger scale settings. However, the work shows that part of transplanted cells can become quiescent (in irradiated and injured wild type and not pretreated mdx  muscle).

This is good to know. However, towards stem cell transplantation for muscle diseases in humans there are many outstanding challenges currently not discussed by the authors:

Those cells could induce cancer. The second risk is that of the tools used to correct genetic defects (generally genome editing), currently are not 100% specific so there is a risk of irreversibly also causing other changes in the DNA.

So at least for muscle diseases this approach will perhaps allow local treatment of small superficial muscles. There may be diseases for which that would improve quality of life, but diseases affecting all muscles likely would benefit less. Note that even for local treatment, a lot more development and testing is needed to see if it can be scaled up (a large mouse muscle is still smaller than most small human muscles) and be effective and safe. So more work to be done.