Today’s pick is from J of Cachexia Sarcopenia and Muscle by Renzini et al on the function of HDAC4 in muscle repair in a dystrophic state IN MICE. Doi 10.1012/jcsm.12891.

Histone deacetylases (HDACs) play a role in histone acetylation and epigenetic modifications. HDAC4 however belongs to class IIa HDACs which are less efficient histone deacetylators and instead act in other ways to inhibit transcription.

For instance, HDAC4 deacetylases cytoplasmic proteins such as myosin heavy chain and can regulate muscle metabolism in this manner. It also plays a role in injury repair. However, the function of HDAC4 is not fully elucidated, especially not in a dystrophic environment

To study this, the authors generated inducible HDAC4 knockout mice, where they could specifically knockout HDAC4 in muscle. Lack of HDAC4 does not lead to pathology by itself. Here authors crossed the inducible knockout model with the mdx model lacking dystrophin (dko mice).

Authors show that HDAC4 expression is increased in mdx mice and in Duchenne patients. It is reduced in the dko mice (KO in the graph) but not fully depleted. Authors confirmed there was no overcompensation of other HDACs in the dko mice. 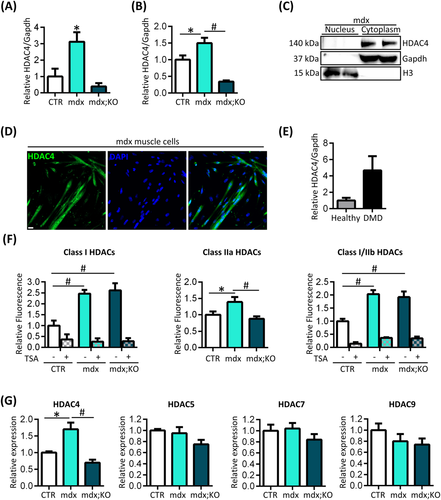 Authors assessed muscle damage by injecting Evan’s blue dye, seeing more damage in DKO than mdx (no wild types included and n = 3 only). They observed a reduction in centrally located nuclei in DKO compared to mdx. This can mean less regeneration or less need for regeneration.

Given that authors showed more damage it means less capacity for regeneration. Running to exhaustion was reduced in dko compared to mdx especially at 16 months. Authors isolated myoblasts and showed in vitro that differentiation was less effective for dko than for mdx myoblasts.

Authors finally showed that it is particularly the cytoplasmiccytoplasmatic roles of HDAC4 that play a role in muscle repair by transfecting or electroporating HDAC4s that either are restricted to the cytoplasm or the nucleus. They further show that HDAC4 can stabilize Trim32 mRNA.

Authors conclude that their data confirms a role for HDAC4 in muscle repair and that increased levels of HDAC4 would be expected to improve pathology (rather than the inhibition that is done by HDAC inhibitors currently in clinical trials.

First some comments about the work: no wild types were used – however, the comparison between mdx and dko can still be made without this. Authors do not specify gender however, and use very small groups (3-4  animals often) – we cannot rule out a gender effect as a cofounder.

Despite this I do believe HDAC4 plays a role in muscle repair in dystrophic mice. Authors suggest that givinostat (an inhibitor of many HDACs, not specifically HDAC4) may not be effective in patients (it is currently in trials for Duchenne). Their reasoning is: