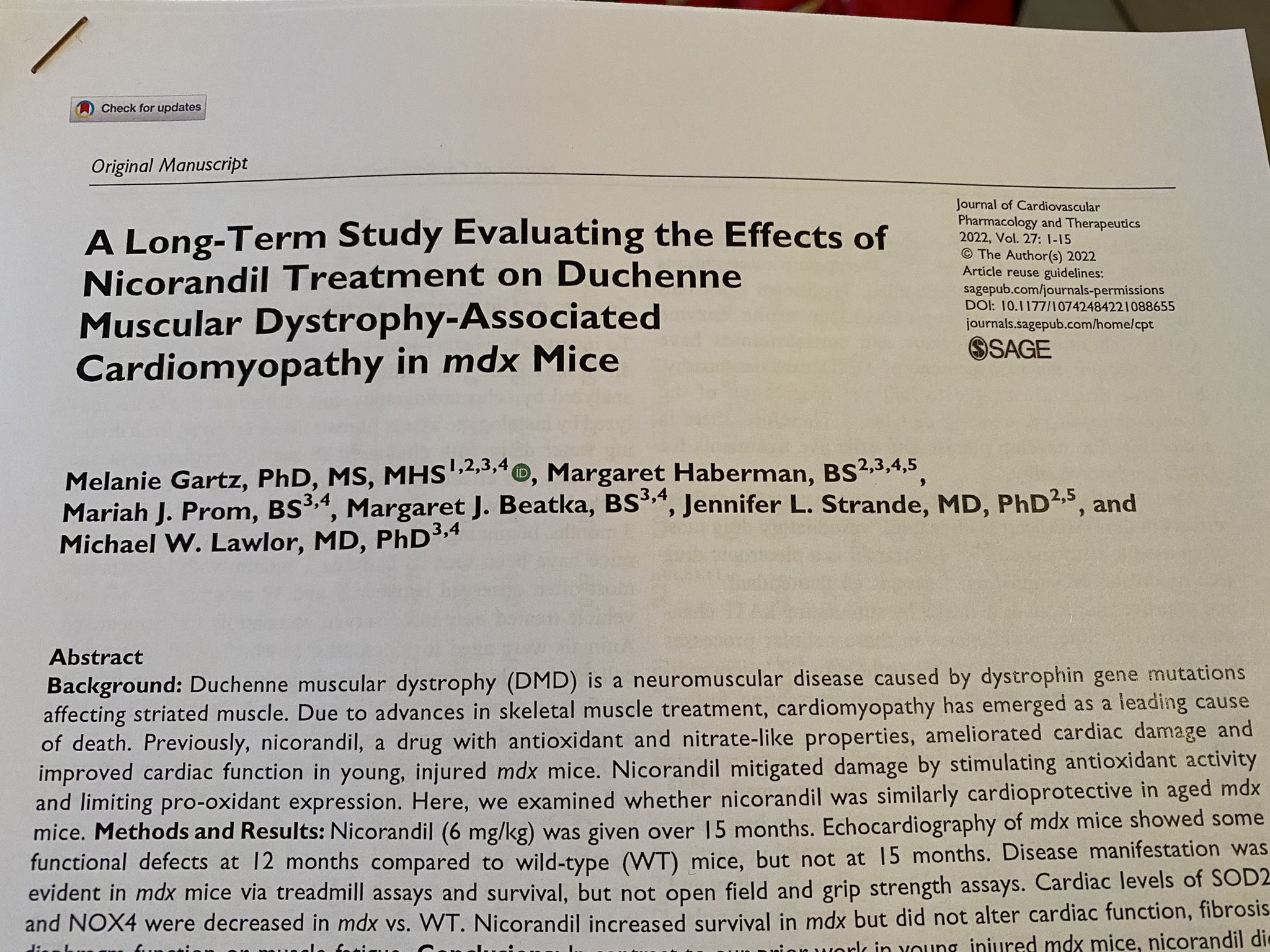 In today’s #apaperaday, Prof. Aartsma-Rus reads and comments on the paper titled: A Long-Term Study Evaluating the Effects of Nicorandil Treatment on Duchenne Muscular Dystrophy-Associated Cardiomyopathy in mdx Mice.

Today’s pick is from Journal of cardiovascular pharmacology & therapeutics by Gartz et al on long term (1 year!) treatment of mdx mice with nicorandil to evaluate effects on cardiomyopathy. Doi 10.1177/10742484221088655

Most Duchenne patients pass away due to cardiac failure, despite treatment with ace inhibitors, beta blockers & corticosteroids, which delay/reduce cardiac problems in Duchenne patients. Authors studied nicorandil in the past & showed cardiac protective effects in young mdx mice.

Here authors tested a very long treatment of mice. Treatment started at 3 months and lasted for 12 months. Heart and muscle function were assessed at 9, 12 and 15 months and fibrosis/histology analysis was done at endpoint (15 months). Wild type references were included (hooray!)

However, the authors used only females in this study. They declare this (good), but do not discuss why they do this. Almost all Duchenne patients are male and it has been seen for some muscular dystrophy mouse models that males are more sensitive to developing heart problems.

At 15 months authors noticed increased heart weight and fibrosis in mdx compared to wildtype. Nicorandil treatment did not improve things. Authors included the whole heart in this analysis rather than a few sections. 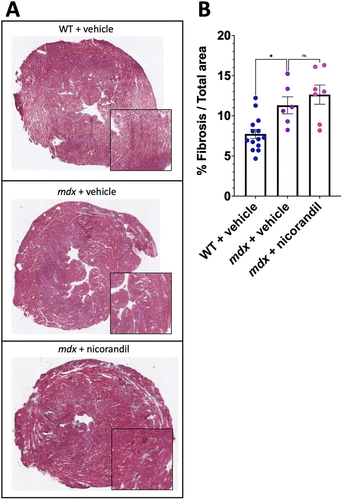 With echo analysis authors saw differences between mdx and wild type only at 12 months. At that time, nicorandil treatment did not improve function. At 15 months no difference was seen between any of the group. There is a ‘but’ though:

Still authors mention the survival effects in the abstract. The problem with the reduced survival of the mdx mice is that the strongest survive, which may explain why a deficit between wild type & mdx was seen at 12 months (with some weaker mice still alive) but not at 15 months.

Authors looked at muscle function with an open field test. This has some strange results, with mdx mice walking more than wild type and treated mdx mice walking less (closer to wild type but not sure whether this is better). (notice F & G are identical – honest mistake I think). 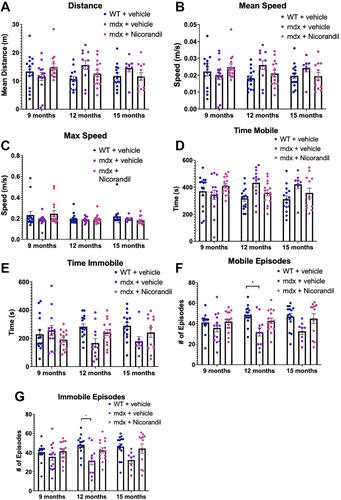 Authors did not see a difference in grip strength between mdx (treated or not) and wild type. The distance traveled was reduced in mdx compared to wild type, but treatment did not improve matters. A treatment effects was not seen on oxidative stress markers. 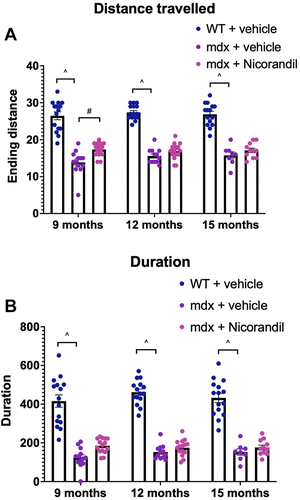 HOWEVER, for the things where authors did see a deficit (fibrosis, distance walked amongst others) there is no treatment effect observed. Authors could consider to use more sensitive manners to measure cardiac function (e.g. MRI rather than echo).

I would also recommend using males instead of females and larger groups so potential survival effects will be significant – or if they are not it is more clear that they are not. The reduced survival in mdx mice was not due to heart problems but mainly due to tumors.

This is a problem in long term experiments – generally we have larger groups in our own natural history study for the 1 year time point to accommodate for this. Authors started with 15 mice and even that was not enough as they last almost 50%.

I commend the authors for sharing results even though they do not show a treatment effect. I have given some recommendations for a repeat study if authors are so inclined. I would also try to measure nicorandil levels in plasma – maybe they are reduced with long term treatment.