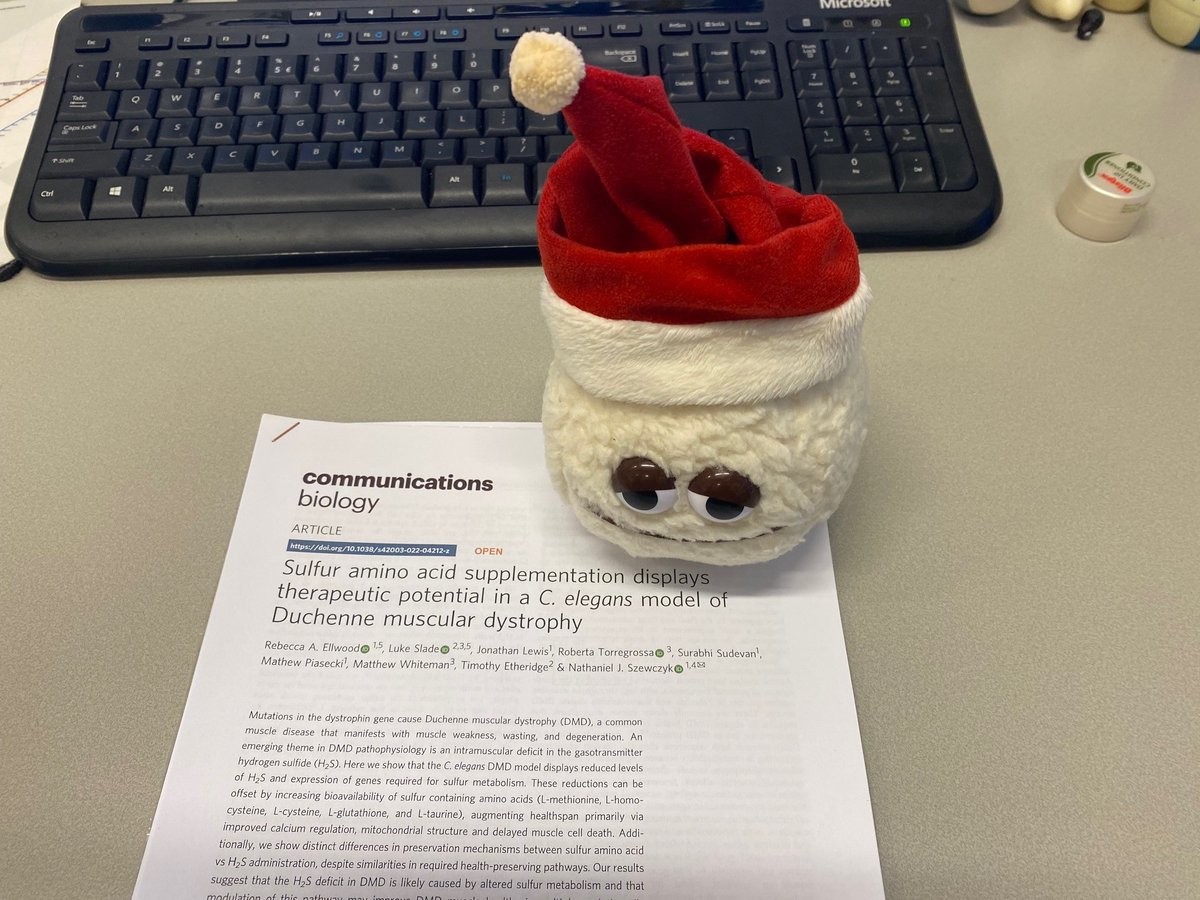 Paper is from Communications Biology by Ellwood et al on a sulfur metabolism problem in a c.Elegans model for Duchenne and how sulfur amino acid supplementation improves deficits. There is a BUT however… doi: 10.1038/s42003-022-04212-z.

Due to lack of dystrophin muscles are damaged in Duchenne and its animal models. This leads to multiple metabolic changes and functional deficits. In the C.elegans (worm) model for Duchenne (dys-1(egg33) this results in reduced mobility, strength and a change in gait.

Elegans is easy to work with: it is small & procreates quickly. However, the C.elegans dystrophin gene is not located on the X chromosome – furthermore (not mentioned in the paper), the worm does not have a utrophin gene – dys-1 gene product acts as dystrophin and utrophin.

In the past authors found that providing sulfur donors improves muscle function and survival. They speculate that the dys-1 worm model has an altered H2S metabolism, associated with mitochondrial problems and oxidative stress and that the donors improved this.

They also found an altered H2S metabolism in mdx and dko (dystrophin/utrophin knockout) mice. Here they want to study this in more detail in worms. NOTE that in their ‘mouse’ paper, they saw similar effects in dko and worms BUT a different effect in mdx.

Sulfur amounts in muscle were decreased in the dys-1 worm and dko mouse, BUT increased in the mdx mouse (with utrophin). So it is possible that the sulfur decrease is a consequence of not having utrophin AND dystrophin – which would make it not relevant for Duchenne patients.

Here authors provided amino acids that are sulfur donors to the worms. This improved movement, reduced muscle cell death, improved mitochondrial appearance and calcium handling for some but not all amino acids. Cysteine worked best. Note that too high concentrations killed worms.

Authors discuss how exactly H2S metabolism is changed in Duchenne and Duchenne models is not known and more work is needed. They also suggest more studies to assess whether H2S donors may work in Duchenne patients – or to quote ‘how can we use sulfur to treat DMD?’

I think before asking this questions, authors need to ask another question: is sulfur homeostasis also disrupted in Duchenne. So far they only found a depletion in animals lacking dystrophin and utrophin – Duchenne patients have utrophin.

So if like mdx mice Duchenne patients do not have a depletion, supplementing with sulfur donors does not make sense. So ideally authors should have a look in existing transcriptome and proteome analyses for muscle biopsies.

Currently they seem to be developing a treatment for a model system rather than the disease. This is a risk when using a model system that is genetically not identical to the human situation – one gene in c.Elegans is two genes in humans (and mouse).