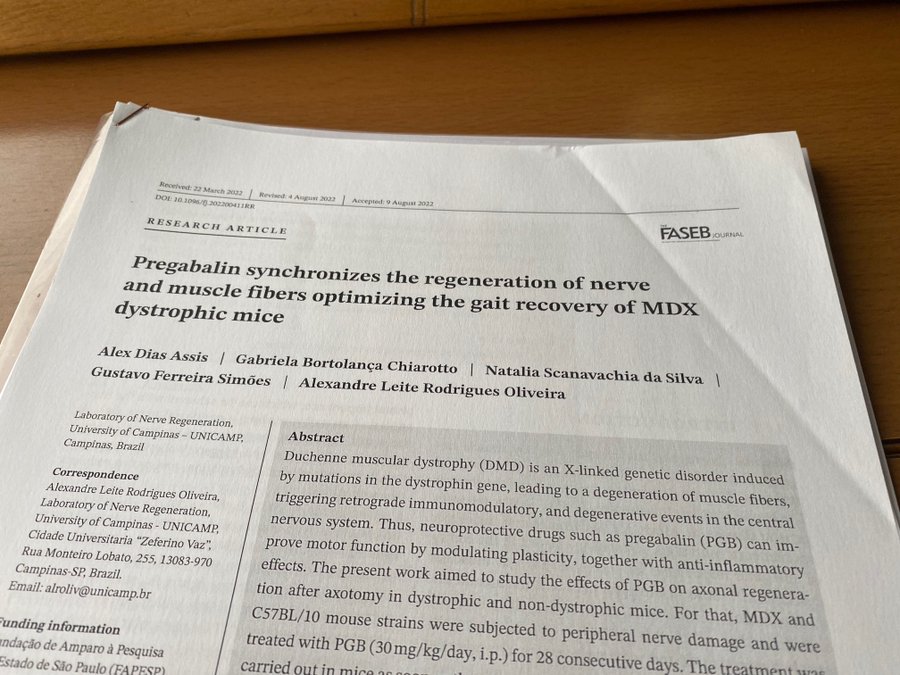 In today’s #apaperaday, Prof. Aartsma-Rus reads and comments on the paper titled: Pregabalin synchronizes the regeneration of nerve and muscle fibers optimizing the gait recovery of MDX dystrophic mice

Another paper on the nervous system and Duchenne in mdx mice. This pick is from the FASEBorg journal by Dias Assis et al on pregabalin treatment for nerve damage in the mdx mouse model.  DOI: 10.1096/fj.202200411RR

Lacking dystrophin muscles are continuously damaged in humans & mice. Especially the mdx mouse has extensive bouts of de & regeneration of muscle. This process also leads to denervation of the muscle. Repair of this takes place but is difficult to study as it is not synchronized

Here authors used an axon crush method in mdx and wild type mice to model the nerve damage in order to study nerve repair in both models (when you crush it, you know when the damage happens so can study it more easily).

Due to lack of dystrophin calcium homeostasis is impaired. This affects muscles but also leads to neuronal degeneration. Pregabalin- is an anticonvulsant drug that can normalize calcium levels in neurons and would be expected to protect and help neuronal regeneration.

Thus authors also tested whether pregabalin pretreatment before the crush improved repair in mdx and wild type mice. The nerve they damaged was the sciatic nerve (which innervates the upper leg muscle from the hip).

Authors showed that mdx nerves had less neurofilament than wild type 3 weeks after the crush. Pregabalin treatment improved this. The same was seen for other nerve damage markers but to a lesser extent. Analyses are based on immunofluorescence stainings that were quantified.

pregabalin treated mdx mice did better than untreated mice, though the effect was limited for the rotarod. Authors discuss that maybe this treatment will be also effective in humans, especially as they saw better nerve health in the nerve that was not crushed (ipsilateral side).

I have some questions (of course). First this is the mouse – to what extent would this also be applicable to the human situation, where the muscle de- and regeneration process is much slower and regeneration is less efficient?

Furthermore, are the effects of pregabalin only seen on nerves or does it also have an effect on skeletal muscle? If it stabilizes calcium homeostasis and it reaches muscle, that would be expected. However, the authors studied only nerves in this study.

So more work is needed. Eg in other models that regenerate less well and also in the mdx mouse to assess the effect on skeletal muscle.