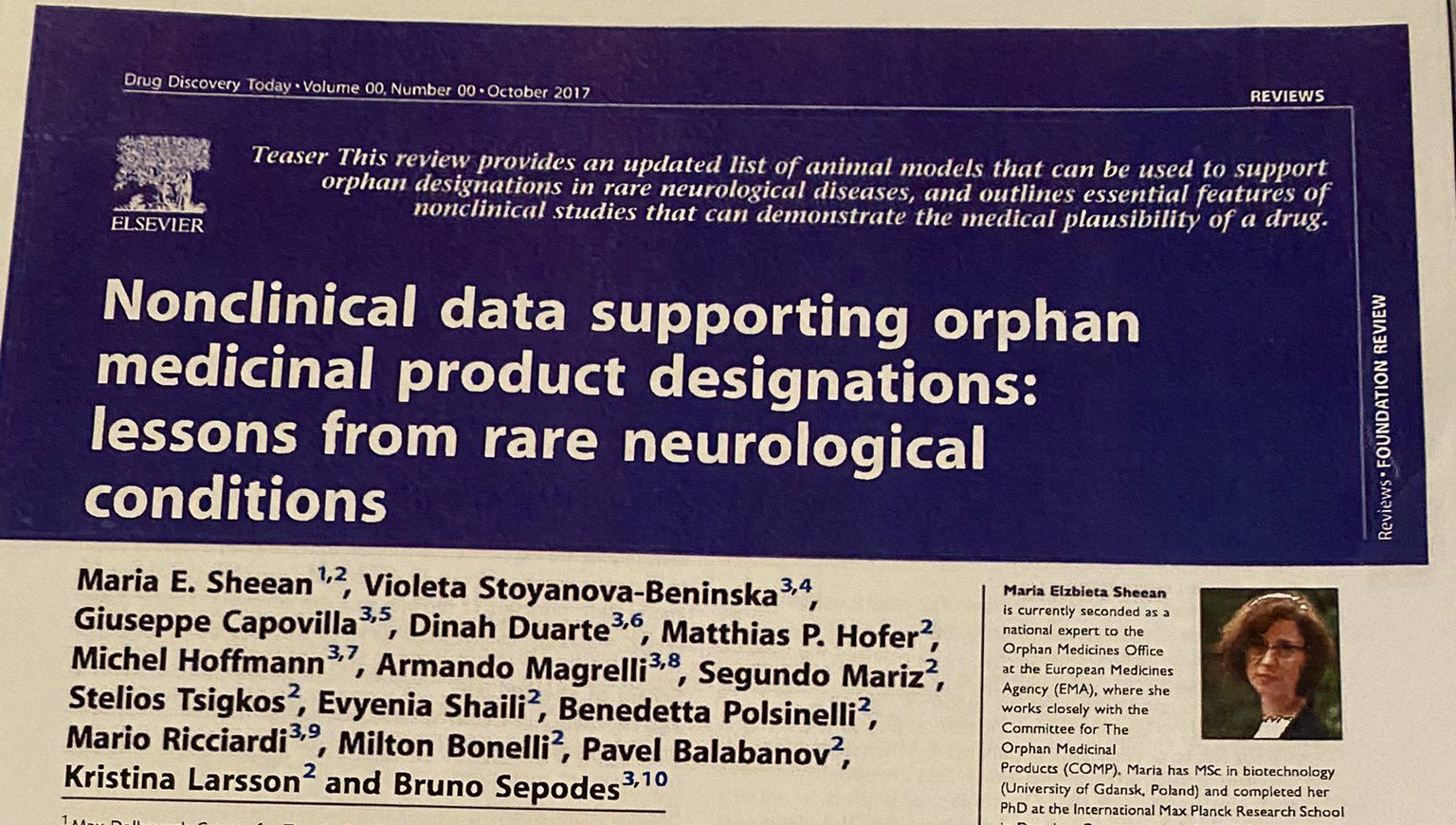 A paper a day is an older paper (2017) by Sheean et al from Drug Discovery Today on proper use of animal model data for orphan drug designation. Joint effort of regulators on personal title. Paper was suggested by Marjon Pasmooij after her lecture TREAT-NMD Euro-NMD Winterschool.

This paper focuses on neurological diseases. Comparable efforts are also published for infectious diseases. Doi of the neurology one that features in #apaperaday 10.1016/j.drudis.2017.09.015

As an incentive to develop therapies for rare diseases, many countries/areas have specific legislation for orphan drugs. In the European Medicines Agency, area an orphan drug designation gives benefits like discounted/free scientific regulatory advice and longer market exclusivity.

The committee for orphan medicinal products (COMP) determines whether an approach merits an orphan drug designation (ODD). For this the compound needs to be developed for a rare, chronic debilitating or life threatening disease and the compound must have ‘medical plausibility’.

Generally data to support this medical plausibility is generated in model systems, most often animal models. The authors here did a retrospective analysis of 102 applications for selected neurological diseases to assess the adequacy and to educate all of us. Much appreciated.

Selected diseases are outlined in the table (see figure). I will not cover all of them but will point out that detailed tables about model systems are in the paper in case you are interested. Will here highlight some of the most notable findings and comments. 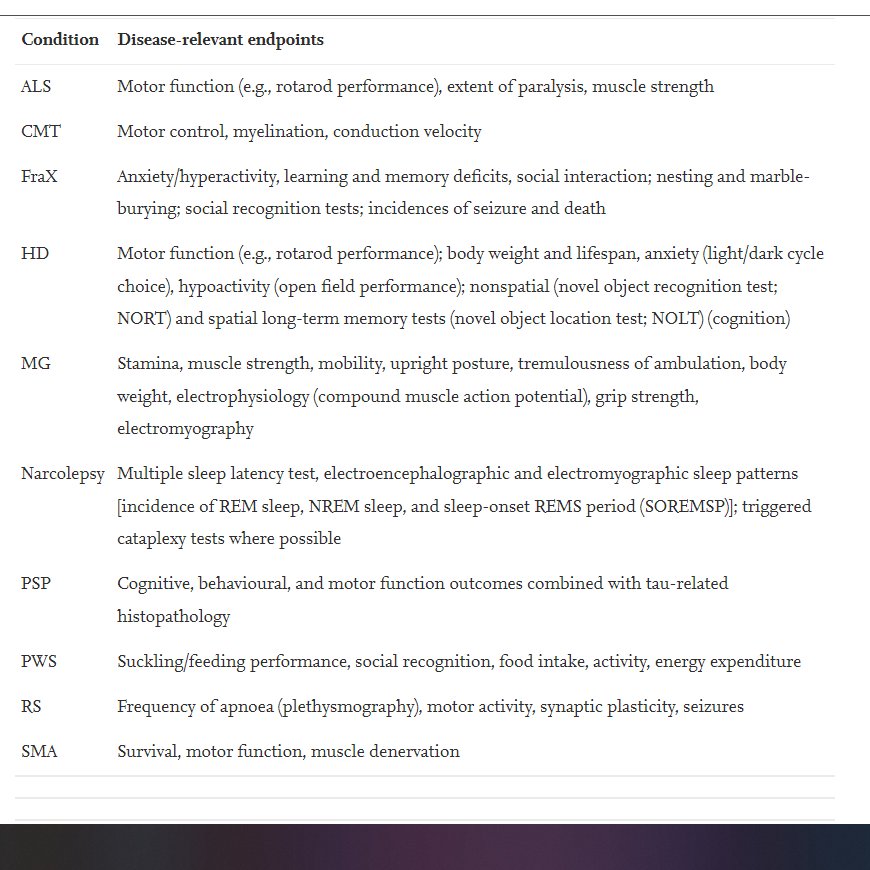 ALS (amyotrophic lateral sclerosis) is a late onset neurodegenerative disease often leading to death 3-5 years after symptom onset. The disease is genetic in a subset of ALS patients and sporadic in others. Challenge: how translatable are genetic models for sporadic cases?

Something authors point out for all neurological disorders is the timing of intervention in animal models. Often this is done before the onset of symptoms (preventative). However, the more likely human setting is treatment after symptoms. So that has to be tested in animals too.

Furthermore, endpoints have to be relevant and ideally functional. e.g. for ALS animal models counting motor neurons was not acceptable by itself, as it had to be supported by functional endpoints as well (strength or motor performance).

Another challenge is how well the model system recapitulates the genetic condition in humans. e.g. the animal model used mostly for Fragile X syndrome has almost absent levels of FMRP & severe pathology, while patients often have higher levels and less severe disease.

Huntington disease is caused by a toxic huntingtin (htt) protein. Something authors do not point out but I will: often models are knock in models, so they also have the mouse huntingtin protein. Thus when targeting the mutant htt one does not test for haploinsufficiency effects.

Authors made a decision tree (see image) to assess the suitability of a model to show medical plausibility. Notably, there are also models that were very predictive, e.g. the SMA mouse models predicted that earlier treatment results in larger therapeutic effects as is also seen in humans. 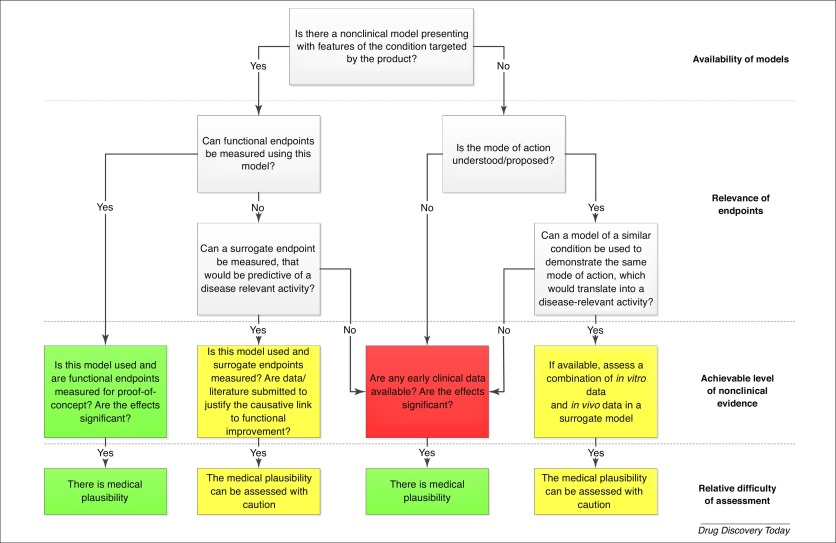 Authors also point out that some diseases like Rett syndrome and Prader-Willi syndrome have many facets. When animal models only recapitulate some aspects and not others, it is difficult to anticipate treatment effects in humans beyond the recapitulated pathology.

Finally authors underline the challenge for Charcot-Marie-Tooth disease, which can be caused by mutations in 80 genes. Animal models are available for some but not all – this makes predictability difficult across different genetic causes using a model for one of the genes.

In the discussion authors advise how to improve the design of preclinical studies: use standardized outcome measure (such as TREAT-NMD set up for neuromuscular animal models), select appropriate endpoints and know your model system so you can ask the right questions.

The endpoint selected has to be disease relevant. Preclinical researchers should develop a therapy for the disease, not for the model system! The model and endpoint has to be suitable to test a drug with a specific mechanism of action.

I really liked the paper and the way authors make difficulties concrete with real life examples and the positive / constructive recommendations at the end. Recommended reading for everyone in the translational field for neurological conditions (even though paper is >4 years old).