Today’s pick is from BioRxiv preprint by Hanson et al (Tom Roberts and Matthew Wood group) on genome editing in the dystrophin utrophin double knockout mouse. An interesting read! Hope to see it in a journal soon. Doi 10.1101/2022.01.025.477678.

For many Duchenne mutations, skipping or deleting an exon would allow production of partially functional dystrophin, as are found in Becker patients. Exon skipping targets pre-mRNA transcripts, which are short-lived. Therefore repeated treatment is required (weekly IV currently).

Deleting an exon in the DNA would give a permanent effect (as long as that nucleus survives each transcript will allow production of partially functional dystrophin). In the past deleting an exon in DNA was unthinkable, but with CRISPR/Cas9 it is now possible.

CRISPR/cas9 is a 2 component system, cas9 cuts DNA and guideRNAs (CRISPR part) tells cas9 where to cut. The DNA repair system will repair the break. This can allow repairing of mutations (homology directed repair) but that is very inefficient and does not work in dividing cells.

So for muscles only the non homologous end joining (NHEJ) repair applies – which introduces small mistakes. However, if you want to delete an exon, that does not matter. With 2 guideRNAs cutting at both sides of an exon, the repair will delete the exon that is to be removed.

For the mdx mouse model the exon to be removed is exon 23. However, the mdx mouse is only mildly affected. Therefore authors here used the mdx/utrophin double knockout mouse (dko) which has a very short survival (8-10 weeks) and is more severely affected.

Authors optimized exon 23 deleting guides in cultured cells (fibroblasts). To deliver the genome editing components to mice authors had to use 2 AAV vectors. 1 for cas9 (which is big) at 10(11) particles and 1 for the 2 guideRNAs at 5.10(11) particles.

However, dystrophin restoration levels were low. About 5% in heart and diaphragm and 2% in limb muscles. There were more dystrophin positive fibers than the % on western blot, meaning that each nucleus that could make dystrophin was not making 100%.

This is  observed often (maybe always?) for genome editing for Duchenne animal models. It is unclear why the levels are <100% for the nuclei that can produce dystrophin. However, possibly transcript instability and histone modifications play a role.

Back to the paper: the intraperitoneal delivery did not improve survival of the treated mice. Authors then used intravenous delivery of 2 days old dko mice. Here they observed 5% dystrophin in the heart but only ~1.5% in other muscles. Again no effect on survival. 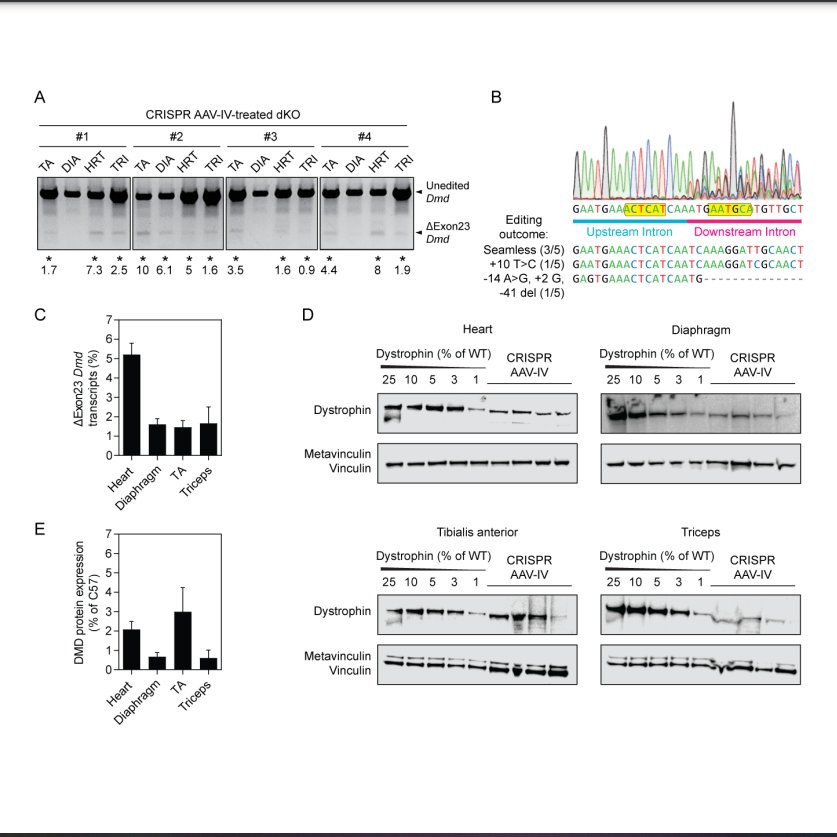 Finally, authors extensively looked at on-target non productive editing events using long read sequencing. >80% of DNA was not edited, a deletion of exon 23 wsa seen in <1%, in 10% of events a single cut was present. Insertion deletions were seen in 2% of events.

For single cuts the 5′ cut was more abundant than 3′ cut. In ~1% of events authors could detect the presence of AAV vector genome in the targeted area. Authors discuss this is the first attempt at genome editing in the dko model but sadly levels were too low to increase survival.

The dose used was equivalent to 5.10(13) for cas9 and 2.5*10(14) for guides. Authors discuss that in previous experiments in mdx mice higher dystrophin levels were seen with higher doses of AAV and/or later analysis time post treatment.

Due to short survival time of the dko mice, authors could not wait longer for analyses. However, likely with time dystrophin levels would improve further (mdx studies suggest this). Using higher AAV doses might work to improve survival but is not physiologically relevant:

The doses used here by authors already are the maximum of what can be used in humans. Even with these doses (1-2.5*10(14)) side effects have been reported in humans including transient kidney failure, liver failure and sadly also death.

Authors discuss the difference between a study from my group showing <3% of dystrophin was enough to increase survival in dko mice. However, there are differences between the two studies:

Finally, authors discuss that the double cut strategy was quite inefficient, while the 5′ single cut was more efficient. Thus, targeting the splice acceptor site to mutate it after error prone NHEJ repair might be a more efficient way to induce permanent exon skipping.

Developments of new approaches is not only about showing what the technique can do, but also by focusing on potential pitfalls and challenges. Hope this work will be out in a scientific journal soon.