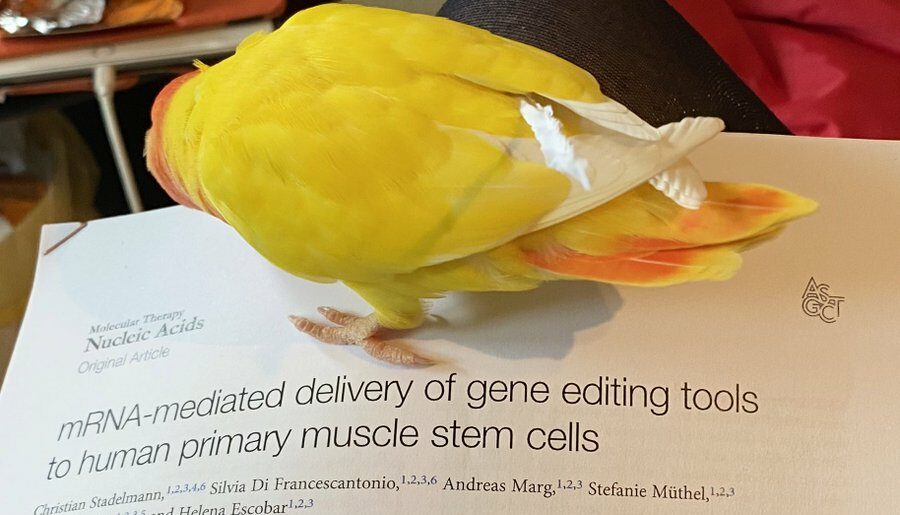 Today’s pick is from Molecular Therapy on nucleic acids by Stadelman et al on editing muscle stem cells by delivery of mRNA encoding base editors. Base editors are a type of genome editors that can correct rather than cause breaks. Doi 10.1016/j.omtn.2022.02.016.

For muscular dystrophy stem cell treatment would in theory be a therapeutic option for muscular dystrophy. The idea is that cells repair the damage and renew themselves so they can also repair future damage. However, there are numerous challenges for this approach still.

Authors focus on the source of cells. Muscle stem cells (MuSCs) are the activated satellite cells that can repair and renew. However, only limited numbers can be isolated from skeletal muscles and they have a limited capacity to proliferate.

As an alternative induced pluripotent stem cells (IPSCs) differentiated into MuSC can be used as a more permanent source of cells. However, for now there are quality and safety issues that preclude this approach from being clinically applicable for muscle diseases.

You can transplant MuSC from a healthy donor but that requires permanent immune suppression, which is a risk for e.g. development of cancer. Thus authors consider autologous transplantation (from the patient) a better option. BUT then of course the mutation needs to be repaired.

Repairing mutations in cultured cells is rather straightforward now with genome editing components. However, the famous cas9 DNA scissor cuts DNA and this has safety concerns as well – especially when it also cuts where it should not cut. Also this approach often does not repair.

Base editors are a tipp-ex type of genome editors: if there is a typo in the DNA, they can correct it in certain cases. This does not require a DNA cut so it is more safe. Thus for DNA typos (aka point mutations) this may be a better approach.

However, genome editing compounds first need to be delivered to the cells in order for this to happen (for cas9 and base editors). Here authors aimed to optimize that approach for MuSc (human primary muscle stem cells).

They argue that they do not want permanent expression of the genome editors but only temporary (after the editing has taken place it can go). Thus they deliver mRNA encoding the editing components. First they test delivery of an mRNA for GFP and most cells turn green. Success! 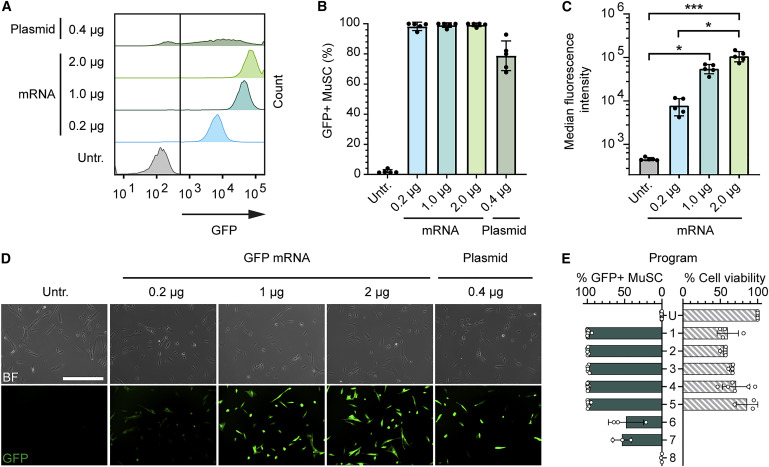 Then they delivered genome editing components targeting the NCAM1 protein. This is a protein that is expressed on the outside of MuSC but not crucial for their survival. Authors can identify cells with (no editing) and without (edited) NCAM1 and so see how efficient editing was.

This revealed that the cas9 approach was more effective than the tipp-ex approach for this NCAM1 protein. The tipp-ex approach aimed to cause skipping of an exon. This happened but not in the way authors anticipated, the cells corrected for this:expression of NCAM1 was maintained.

Finally authors used the tipp-ex system to correct a mutation in cultured cells of a patient with an alpha sarcoglycan gene mutation. Here the editing was much more efficient (>80%) and quite precise – in a culture dish.

Authors discuss that further optimization of efficiency might also risk less precise correction. However, they admit that they did not check here where editing of other genes occurred – only that it was precise within the alpha sarcoglycan gene.

Authors discuss delivery of mRNA to all muscles currently is not feasible. Lipid nanoparticles (LNPs) have been used to deliver mRNA to the liver. However, muscles are notoriously difficult to target and the liver is notoriously efficient by fishing out DNA, RNA & lipids from blood.

Authors are in favor of ex vivo editing (in the culture dish) and then transplanting. However, producing enough cells will be a challenge and for now only local delivery is a potential option. For OPMD (oculo-pharyngeal muscular dystrophy) this may work for swallowing muscles.

I commend the authors for not overselling this approach and suggesting that systemic delivery of MuSC is an option. Instead they focus on what may be feasible in the shorter term: transplantation into small muscles that are very important for function.