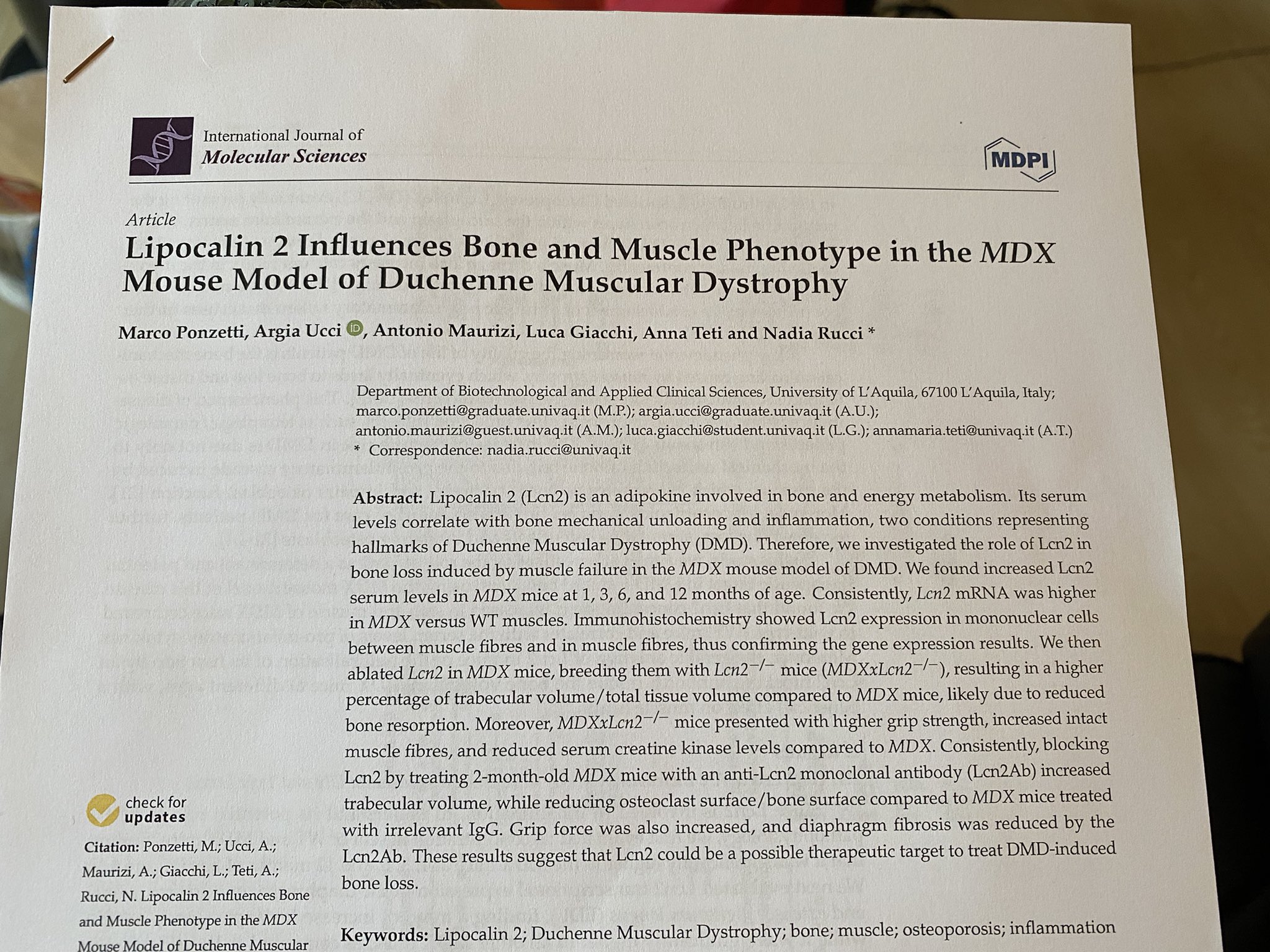 Today’s special weekend version related to the Italian International Conference on Duchenne and Becker Muscular Dystrophy is from an Italian group on lipocalin 2 involvement in muscle and bone quality in the mdx mouse by Ponzetti et al in Int Journal of Mol Science doi 10.3390/ijms23020958 .

Yuzu is too busy today to coread today. The paper is on Lipocalin 2 (Lcn2), a protein with multiple functions including a role in muscle regeneration and bone health. It was upregulated in mice sent to space (!) resulting in reduction of bone and muscle.

Duchenne patients have bone mass loss as well due to less weight bearing exercise (due to loss of muscle function) but also the use of corticosteroids. Here authors studied the role lcn2 plays in these processes. Disclaimer: I am not an expert in bone. My friend Dr. Jarod Wong is.

Lcn knockout mice are black 6 background, while mdx is black 10 – authors crossed wild types to obtain a mixed background wild type reference – very good! However, they do not indicate whether they used males or females & in many studies have N=3 or 5 so gender effect is possible.

The 12 months old dkos showed no difference with mdx suggesting a delay rather than prevention of bone phenotype. On muscle level grip strength was improved at 3 and 6 months for dko compared to mdx, also less fibrosis was seen in diaphragm. No reduction in central nuclei numbers.

Since having a genetic knockout is not the same as postnatal treatment, authors also treated mdx mice with Lcn2 antibodies starting at 2 months of age (IP injection with biweekly maintenance doses). Control was an irrelevant antibody. No wild type reference for this experiment.

Bodyweight was unchanged. No differences were seen in mechanical bone properties (but we remember there was no deficit compared to wild type so this is not surprising). Gripstrength improved in Lcn2 antibody treated mice. Expression of regeneration markers was unchanged.

Expression of Col3a1, one of the most important proteins in muscle fibrosis was reduced in the diaphragm of Lcn2 antibody-treated mice. Authors also studied safety, excluding liver and kidney toxicity after 30 days of treatment.

Authors conclude that the results warrant further investigation of Lcn2 removal as a therapy for Duchenne to reduce bone loss and improve muscle quality. I agree it is interesting, but one important study so far is missing: combination treatment with corticosteroids.

Authors indicate that steroids may actually induce Lcn2 expression. Given that most Duchenne patients are treated with steroids, and known to be linked with Lcn2 expression, the effect of Lcn2 targeting should first be tested in steroid treated mdx mice.

I like that authors are cautious and do not oversell. Also like that they made the wild type reference by crossing backgrounds. However, they do not mention which gender was used, suggesting both were used. Combined with small numbers (3 or 5 per group for dko studies)…

This means some findings may be gender effects rather than knockout effects (for a group of 3, having 1 male + 2 females vs 2 males + 1 female will likely have an impact when studying strength and bone mass). The antibody treatment study used groups of 6 but lacked wild types.