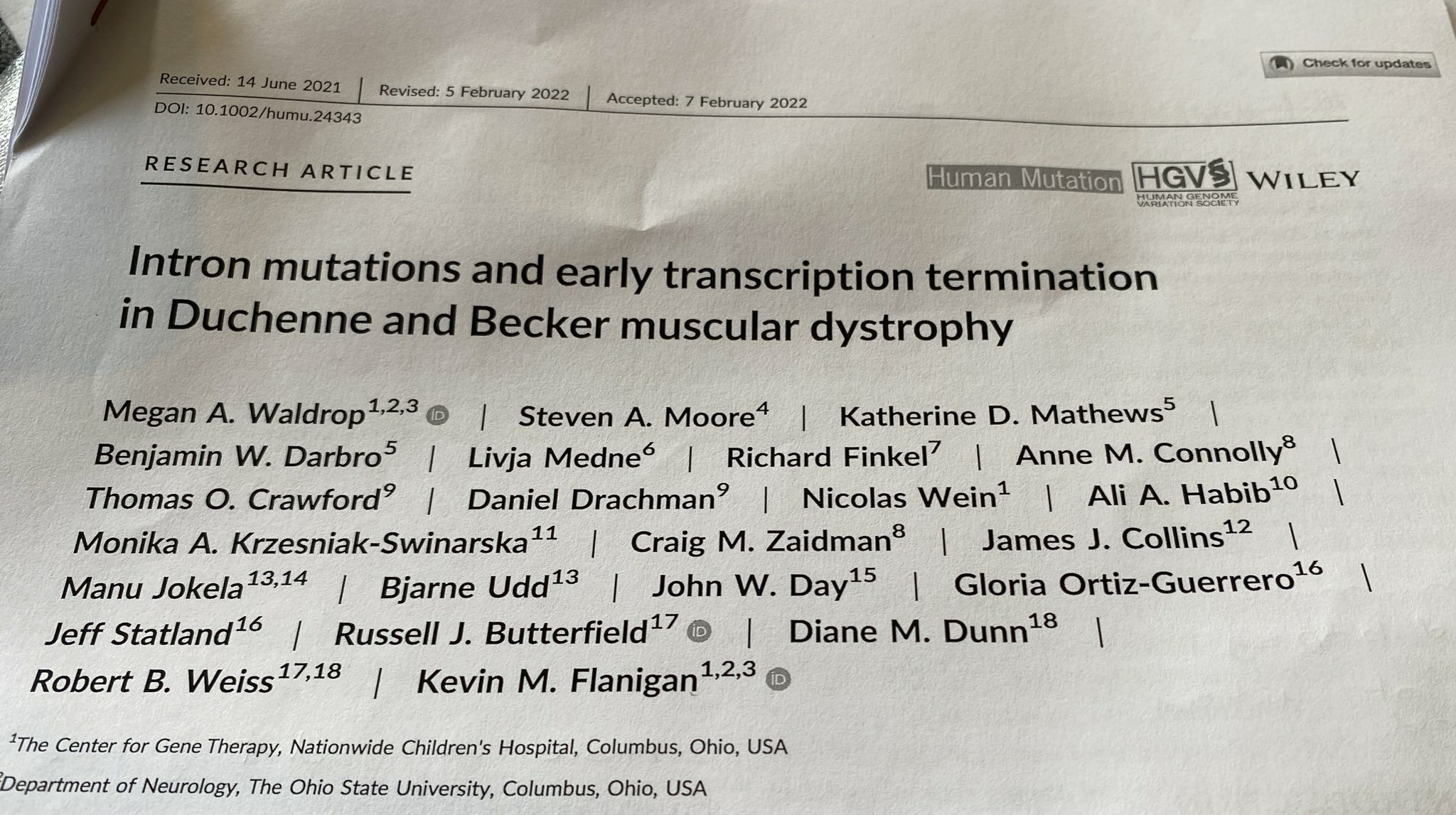 Today’s paper from Waldorp et al from Flanigan group at last. The paper is about deep intronic mutations in the dystrophin gene – my favorite type of mutations! Somehow I missed the paper when it was published in February, but fortunately Pietro Spitali alerted me to it. Published in Human Mutation and doi 10.1002/humu.24343.

The dystrophin gene (formally DMD gene) is a very large gene, spanning 2.2 million base pairs (most genes are about 30 thousand base pairs…). Most of the gene is intron, i.e. the non coding parts of DNA laying between the exons (parts containing protein code).

It is likely these patients have mutations in introns that interfere with splicing by causing part of an intron to be recognized as an exon. These ‘fake exons’ (called pseudoexons or cryptic exons) are included in the protein code, because do not contain code –> no dystrophin.

Finding these mutations is challenging, as the protein code needs to be analyzed, and this is not present in blood cells (since these do not make dystrophin protein). So a muscle biopsy is needed to find them – which is invasive.

Here authors analyzed biopsies from 19 patients suspected of having Duchenne or Becker for whom no mutation has been found & analyzed the protein code (mRNA transcripts). They found intronic mutations for each. Mostly these were point mutations (change of one DNA unit to another).

A schematic overview of what the mutations looked like and resulted in the image below. For the genetically inclined followers. Most mutations caused part of the intron to look like an exon (donor/acceptor splice site or exonic enhancer sequence). 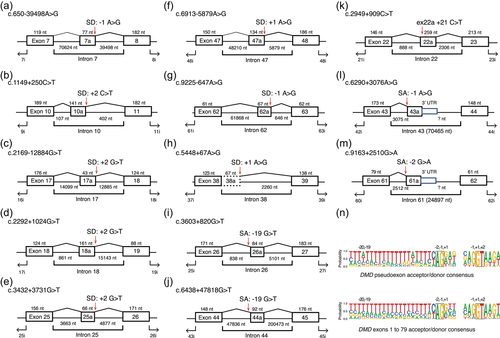 In other patients, a foreign piece of DNA was placed within the dystrophin introns (either a repeat unit or DNA from another chromosome). Part of this was recognized as an exon and included in the dystrophin protein code.

Large rearrangements were found too (inversions). Interestingly for 2 transcripts with a cryptic exon , authors noticed the transcription of protein code stopped immediately after including the fake exons. For one this was due to the presence of an ‘end’ signal (polyA)

For the other it was less clear why transcription stopped. Authors speculate it is because no clear splicing signals were found after fake exon was included. Authors also looked in prediction software. If the introns were analyzed, could the cryptic splicing have been predicted?

The prediction software (SpliceAI) predicted some but not all cryptic exons. Authors also looked into how many possible permissive regions are present in dystrophin introns (i.e. how many locations were predicted to lead to cryptic splicing when they were mutated): 13,129.

Note that this is a prediction – some predictions may be false, while other areas may not have been picked up. Still it is a large number of potential sites. Authors also looked into the connection between recursive splicing (introns being removed in steps) and confirmed a link:

Would point authors to this Cell paper that suggests cryptic splicing occurs for most human introns. Given the size of dystrophin introns, I would think it very unlikely they are excluded. Also we found recursive splicing for most.

Having said that, the percentage of 0.2% that is often mentioned is likely an underestimation. Many people do not look for cryptic splicing mutations (as it involves most work with complex methods and a biopsy). If you do not look for them, you will not find them.

All in all I really like the paper. I commend the authors for looking into this in detail and reporting these interesting mutations, including the one with the transcription stops. Do not agree with all the authors’ suggestions about recursive splicing (or lack thereof).

However, I look forward to having a discussion about this with K Flanigan and other authors in person ideally with a glass of wine. This will allow us to discover whether we can come to an agreement or agree to disagree. Won’t take away from the content of the paper though.