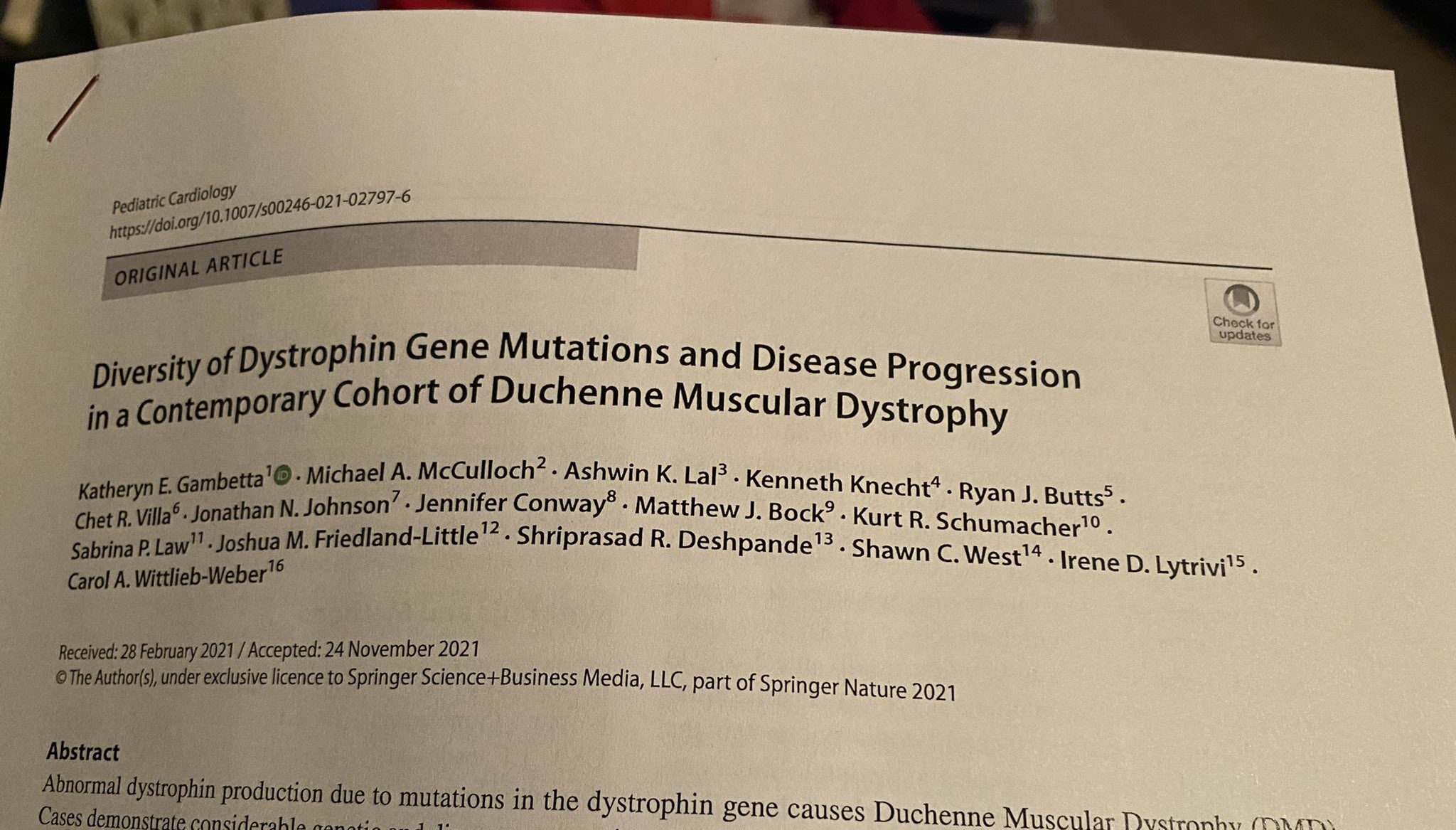 In today’s #apaperaday, Prof. Aartsma-Rus reads and comments on the paper titled: Diversity of Dystrophin Gene Mutations and Disease Progression in a Contemporary Cohort of Duchenne Muscular Dystrophy.

After 2 days of CF exon skipping we have a paper on Duchenne mutations and their relationship to disease progression today. Gambetta et al in Pediatric Cardiology. As expected there is a focus on heart pathology doi 10.1007/s00246-021-02797-6

Authors did a retrospective analysis in Duchenne patients, their mutations & the correlation with pathology. Patient data were collected from centers in the USA & Canada. 436 patients were identified, but only 324 included in the analysis, as genetic data was lacking for 112 patients. This means over 25% of patients did NOT have genetic test results. In this day & age that is not acceptable since without a genetic test carrier analysis is very difficult and you also do not know whether patients are eligible for mutation specific treatments (4 approved in USA).

I have highlighted the importance of genetic testing for Duchenne patients in this educational review paper https://pubmed.ncbi.nlm.nih.gov/26754139/ co-authored with Kate Bushby and Ieke Ginjaar (involved in setting up genetic test system for Duchenne in the Netherlands).

Only 49/324 had cardiac MRIs (while this is now in the standards of care https://pubmed.ncbi.nlm.nih.gov/29395990/ – however with a retrospective analysis we are of course looking into the past). 63% of patients developed left ventricular dysfunction during the retrospective study 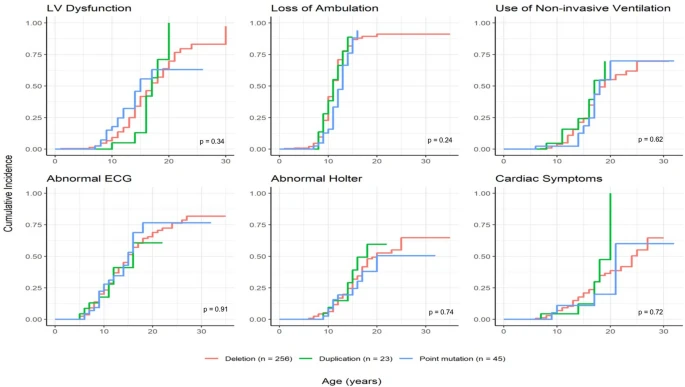 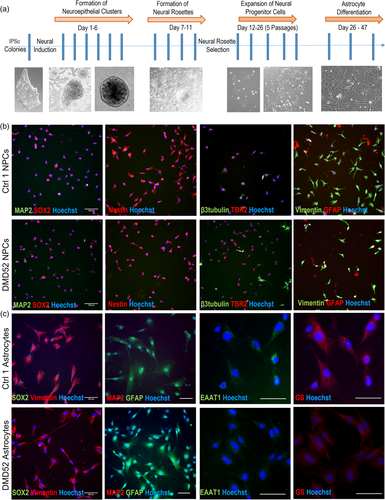 Genetic mutation analysis revealed 79% of patients had a deletion of one or more exons, 7% had a duplication of one or more exons and 14% had a small mutation. This is different from the 25-30% small mutations generally found. Authors do not discuss this discrepancy. My potential explanation is that all patients were analyzed with MLPA to detect deletions and duplications, but only a subset was studied further to identify small mutations when no deletion or duplication were found (this analysis is more laborious).

Most deletions cluster between exon 45 & 51 (aligns with hotspot of exon 42-55). Deletion size varied between 1 and 52 (!) exons. For duplications, the exon 2 duplication was most common (aligning with what others found). Small mutations occurred throughout the mRNA as expected.

Also not related to the possibility of expressing shorter dystrophin isoforms, as the promoters are located in intron 29, 44, 55 and 62 – so in the middle of some of the bins for most. Authors then do analysis on pathology for the specific bins and find some differences.

For some comparisons they found differences between mutation locations. However, their rationale is unsound. Let me explain. e.g. patients with a deletion between exon 40-54 have a later onset of arrhythmias. Authors suggest this is because these exons encode hinge 2…

and other areas of dystrophin that are apparently important for heart function. HOWEVER, NONE of the patients will express these domains. The patients have Duchenne, the mutations lead to non-functional, unstable proteins. So looking at where mutations are located is pointless.

Authors discuss similar findings for Becker patients. HERE this analysis makes sense as Becker patients produce dystrophins that vary in which parts of the protein are present and absent. So that will teach you about dystrophin domains and function. Since for Duchenne patients, the location of the mutation does not matter for muscle dystrophin (it is absent), I will refrain from summarizing the different comparisons the authors make for smaller and smaller subgroups.

Authors discuss that the variability can also have been caused by genetic modifiers. I agree – we know these can play a role. Authors say future studies to identify the genetic modifiers in this cohort would be useful. Agree again.

As limitations, authors indicated that this was a retrospective study, meaning that there was no influence on standard of care patients received. This will have influenced trajectories as well. Also they indicate some subgroups are very small.

Additional limitations (sorry I am so negative):

I would not be surprised if differences seen between mutation location & pathology are due to different percentages on/off steroids rather than mutation location. Recommend to NOT read this paper and am sad the peer review system failed to point out obvious errors in thinking.