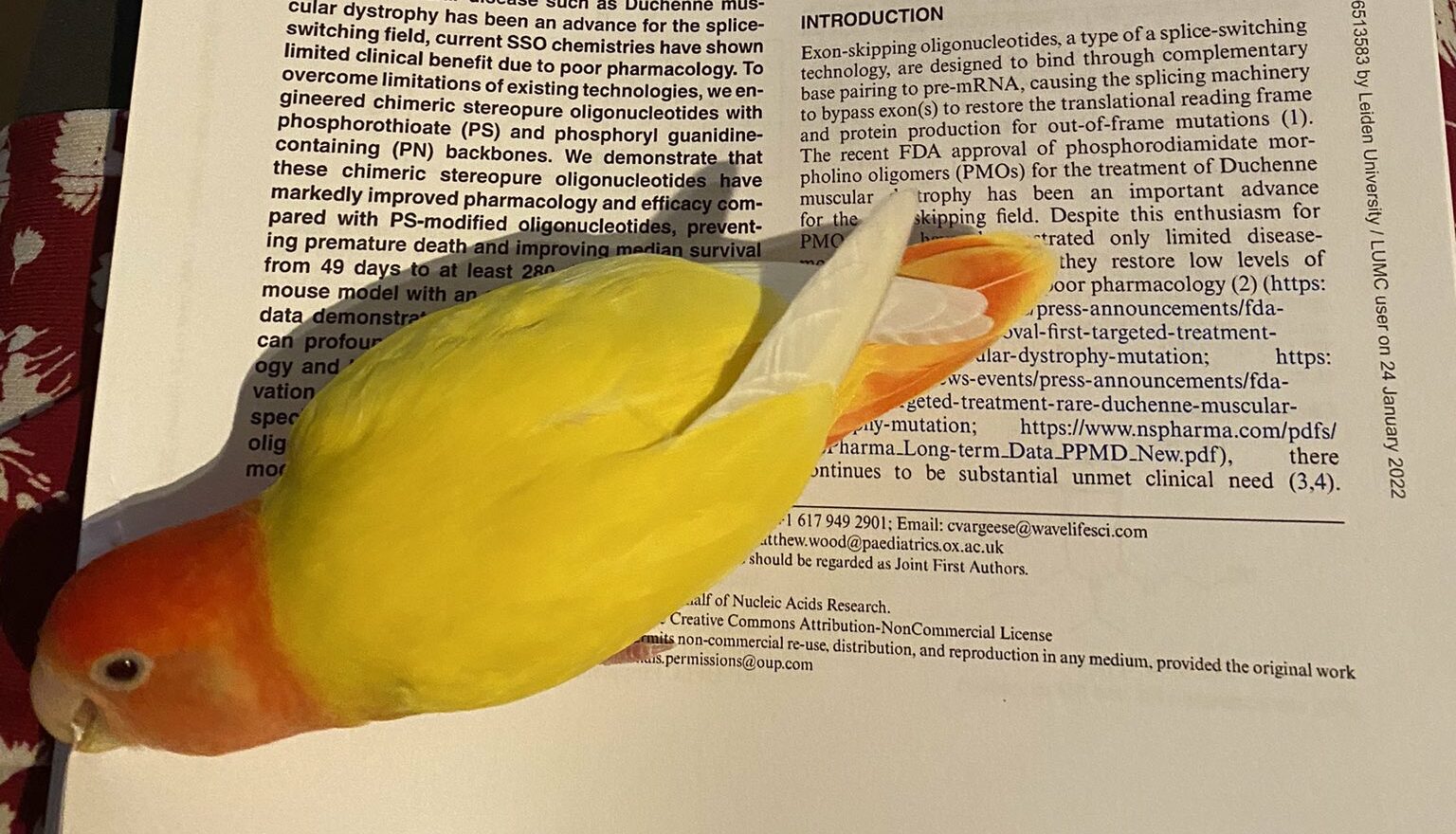 Exon skipping for Duchenne aims to allow Duchenne patients to produce Becker-like dystrophins. Four exon skipping drugs have been approved by the FDA. There is clear room for improvement as these compounds only induce very low levels of dystrophin production.

From animal studies we know delivery to heart & diaphragm is very poor for approved ASO chemistry (PMO) (for obvious reasons we do not know whether this is also the case in humans). Authors here use stereopure and chemically optimized ASOs to improve efficiency of exon skipping.

What is stereopure? The backbone of the ASOs can take two ‘shapes’ that are not transposable but mirror images (like hands – this is why the term chirality is used, derived from the Greek word for hand).

This means that at each backbone connection there is an S and an R shape. For a 2-mer ASO (1 connection) there are 2 types, for a 3-mer (2 connections) 4, for a 2-mer (19 connection) ~ half a million different ASOs. Sequence is the same, but the S and R shapes vary.

Does this matter? If the mix of S and R shaped connections works sufficiently it does not matter. However, if you know that e.g. having an S shape everywhere is more efficient, that is a way to improve efficiency of an ASO. Note that I do not say ‘easy way’.

Generating stereopure ASOs (with a specific S or R shape for each connection) is challenging from a manufacturing perspective. Here authors achieved this and went to optimize a known exon 51 2OMePS ASO (I published on this one in 2002 – good old days).

Authors did a lot of optimization and testing and the most efficient ASOs had 5-6 2F modifications at each flank, S shapes for PS linkages and R shapes for PN linkages. Note that of course authors could not test all possible combinations. 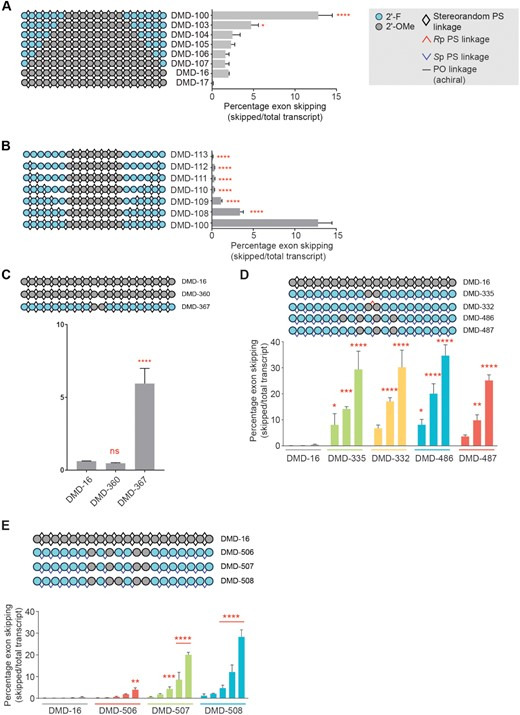 Authors did a lot of experiments in cultured human cells with human ASOs and with mouse ASOs in cultured cells, mdx mice and the mdx/utrophin double knock out mice. I will summarize briefly but want to stress that there really is a LOT of data in this publication.

After optimization of the mouse exon 23 ASO (with similar structure as the human exon 51 ASO), mdx mice were treated for 6 weeks with weekly doses of 50 mg/kg. This resulted in exon skipping in gastrocnemius, diaphragm and heart for the optimal ASO.

Authors showed that the PN modification resulted in better uptake by skeletal muscle. They also tested tolerability, showing that liver damage markers did not increase after 6 weekly doses with 60 mg/kg (not 50 mg/kg apologies) IV.

Authors then tested this ASO in dko mice at 75 mg/kg showing increased force and reduced force drops. Unfortunately there are no wild type mice included so we do not know the level of normalization. The dark blue ASO appears a potent skipper though (B). 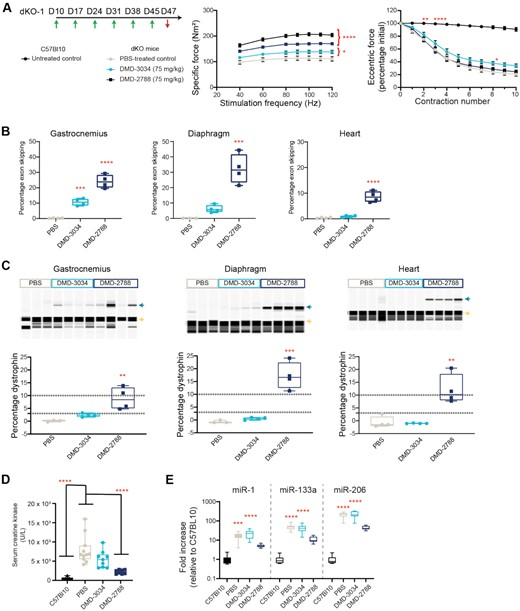 Dystrophin restoration was confirmed. Authors then performed a survival study, treating very young dko mice with 75 mg/kg every other week or 150 mg/kg per week. Both improved survival and function (here authors used mdx mice as ‘controls’ they should have used wild types!)

The treatment also improved respiratory function to normal levels (here suddenly wild types are included!) I do not want to be paranoid but when authors include wild types for some functional analyses & not for others, I get suspicious.

I will stress again to include wild type animals or cells in all studies where you want to show a therapeutic effect. Only then you can draw conclusions about the level of normalization/restoration (e.g. here the respiratory function goes to normal/wild type).

Authors discuss that they have developed methods to make stereopure ASOs with an efficiency of 99%. I do not know whether this means 99% of the ASOs are the specified S and R shape, or whether the efficiency of each connection is 99% –> 82.6% stereopure for 20-mer ASO.

Authors also discuss the use of 2F modifications. We have tested fully modified 2F ASOs for mdx mice in the past https://pubmed.ncbi.nlm.nih.gov/26623937/ (not stereopure). In our hands this resulted in poor exon skipping but also safety concerns: less weight gain and enlarged spleens.

Note that the authors observed reduced weights for the high dose dko mice, but not for the lower dose. Unfortunately, authors did not assess the spleen weight in these mice. They focused only on liver safety, while knowing significant amounts also go to the kidney…

Finally authors discuss the results in light of suvodirsen, a stereopure exon 51 ASO tested in Duchenne patients in a clinical trial. Sadly this ASO did not restore dystrophin production at doses tested. The doses used in dko mice would translate to ~6 mg/kg & 12 mg/kg biweekly.

The 12 mg/kg dose has not been tested in the trial. The 6 mg/kg was, but using weekly doses. Generally speaking the mouse exon 23 ASOs outperform ASOs targeting human exons. For this reason using humanized animal models is a better option for extrapolation of trial doses.

I like the enormous amount of data the authors publish here and the fact that they publish even though the clinical development was stopped due to no dystrophin restoration. However, I do not like that authors fail to include wild type references for most experiments.