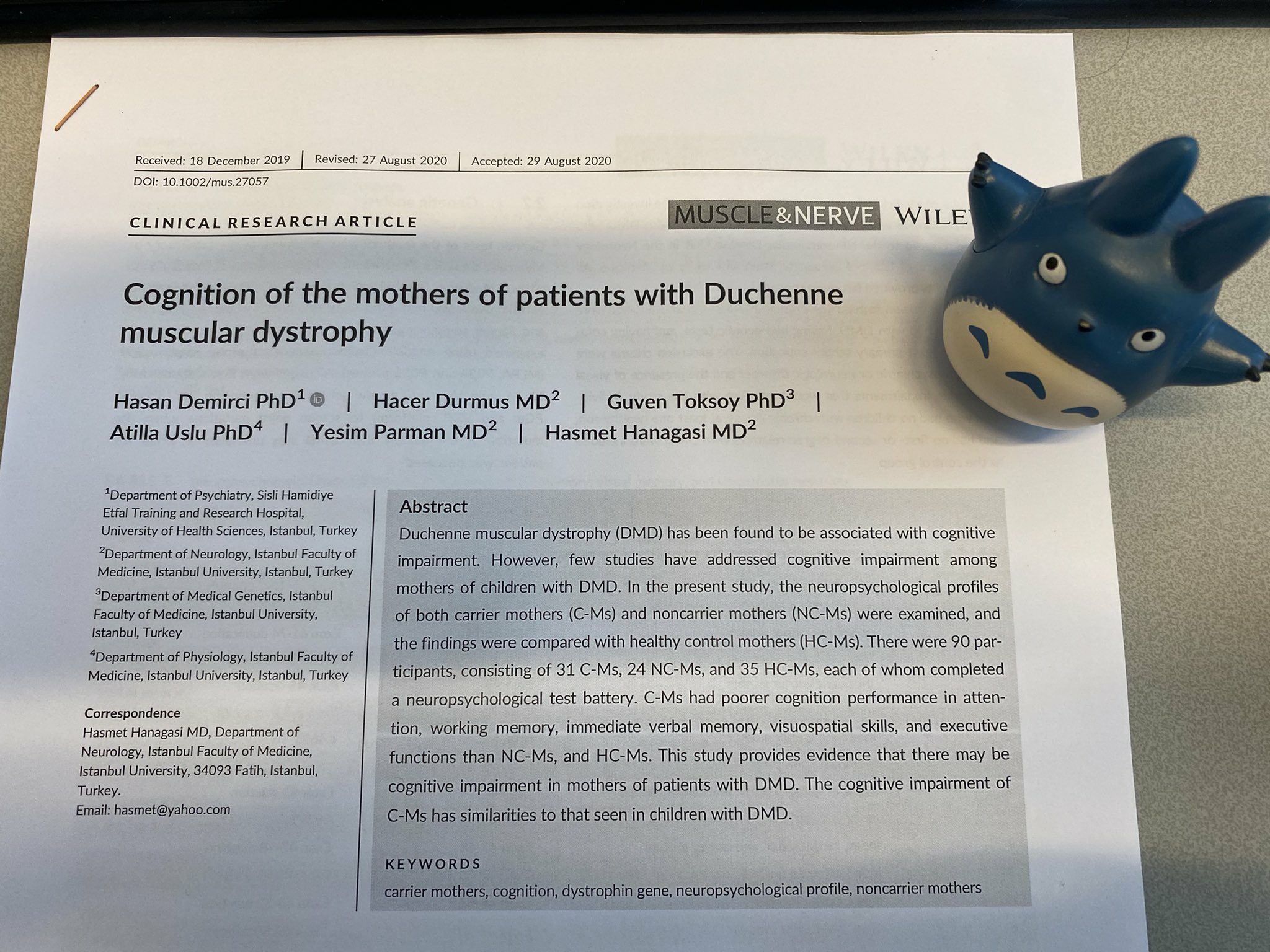 In today’s #apaperaday, Prof. Aartsma-Rus reads and comments on the paper titled: Cognition of the mothers of patients with Duchenne muscular dystrophy

Today’s pick was published in Muscle & Nerve and is about cognition in female carriers on dystrophin mutations. Published in 2020 but I managed to miss it so far. Doi 10.1002/mus.27057

Duchenne is mostly known as a muscle wasting disease. However, it is also characterized by heart problems and cognitive problems.  About 1 in 3 patients have an IQ less than 70 and learning difficulties and behavioral problems are common.

Duchenne is caused by mutations on the dystrophin gene, which is located on the X-chromosome. This means that females are carrier of the mutation and generally are healthy. Some carriers, however, have muscle pathology (cramps and weakness).

Also ~1 in 5 carriers will develop cardiomyopathy and therefore carrier females of dystrophin mutations need to be monitored for this starting in adulthood (as per standards of care). Whether carriers also have cognitive problems is less clear. Authors here aimed to study this.

They studied 90 participants, 55 mothers of Duchenne patients, 31 carriers of dystrophin mutations and 24 non-carriers as well as 35 mothers of healthy children. I commend the authors for having good control groups!

In the past some studies have shown that carrier females may have cognitive problems, but others did not. It is clear that dystrophin is expressed in the brain, and carriers will have 50% of nuclei that do not express dystrophin due to X-inactivation of the non mutated allele.

This is something that bears more studying – as mentioned often this is something under research in the BIND project. Authors indicate that the presence or absence of different dystrophin isoforms can influence cognitive problems (less isoforms, more severe problems).

Especially Dp140 appears to play a role (patients with Dp140 generally have better cognitive function than those without). While authors mention this, they did not look into whether mutations allowed Dp140 production in their study.

Authors mention that the reason why Duchenne mothers may have performed worse than mothers of healthy children is that they are more sleep deprived and depressed. This is why including the non-carrier Duchenne mothers as a control group is so important.

Authors discuss the limitations, mainly that the group sizes for now are small. For future studies they suggest including also a control group of mothers with chronically ill children (not sure if this is needed, the Duchenne non-carrier group actually is this control group).

I commend the authors for this work and look forward to a follow up in the future from this group and/or in the BIND project.