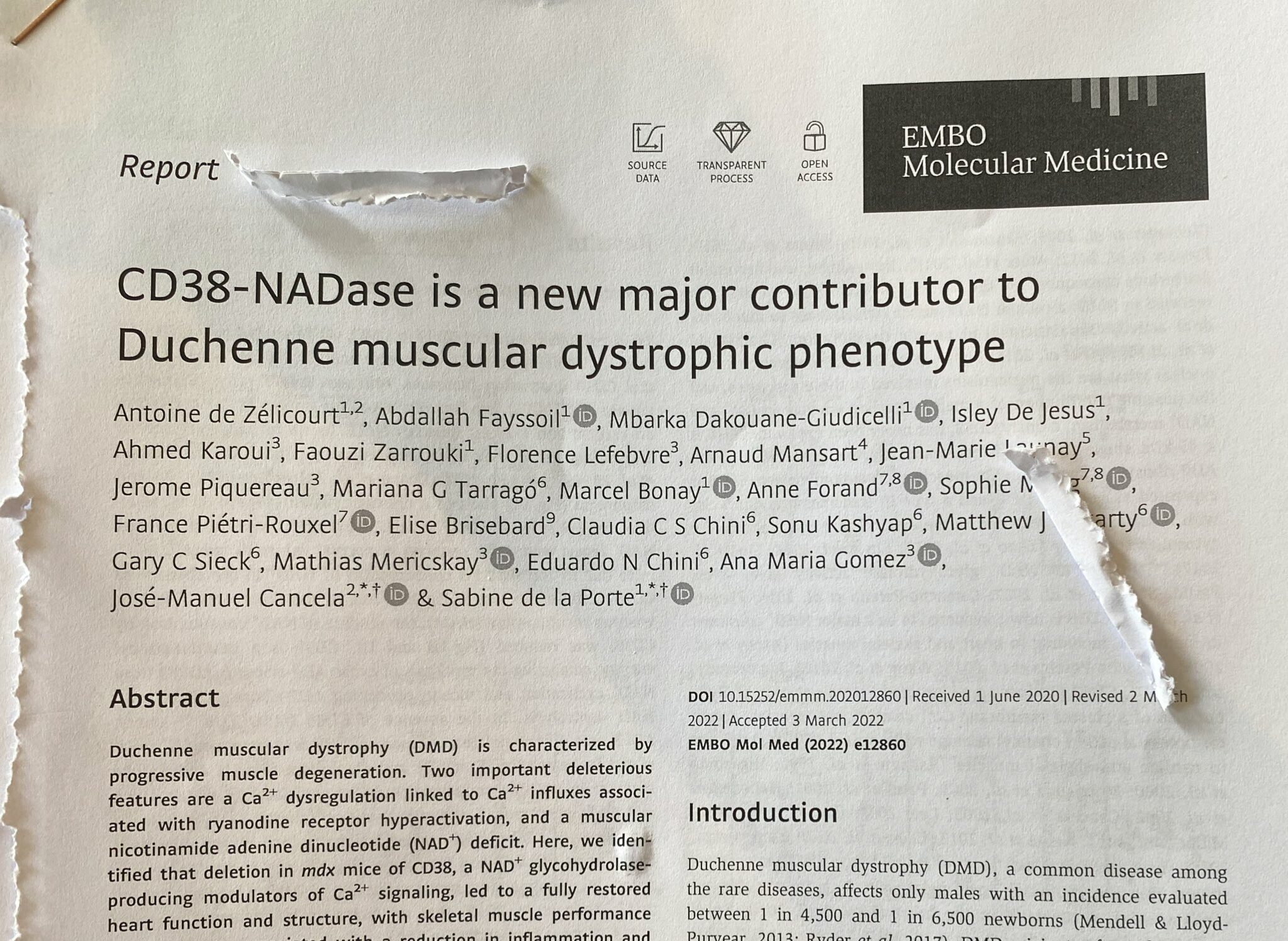 In today’s #apaperaday, Prof. Aartsma-Rus reads and comments on the paper titled: CD38-NADase is a new major contributor to Duchenne muscular dystrophic phenotype.

Today’s pick is from EMBO Molecular Medicine by Zélicourt et al doi 10.15252/emmm.202012860. The paper is about CD38-NADase, a new major contributor to Duchenne muscular dystrophy phenotype. We’ll get back to that title at the end. Duchenne is caused by lack of dystrophin, which leads to fragile muscle fibers, and loss of calcium ion homeostasis in the muscle fibers.

NAD+ is a molecular that is involved in energy production. CD38 is an enzyme that can hydrolyze NAD+ and also modulate calcium channels. Furthermore, it plays a role in angiotensin pathways – which control blood pressure. Duchenne patients get cardiac problems later in life.

Treatment for this are ACE inhibitors (angiotensin converting enzyme). Long story short there are many reasons to believe CD38 plays a role in multiple aspects of Duchenne pathology in skeletal muscle and heart. To study this in more detail authors use knockout mouse models.

They crossed CD38 knockout with mdx mice to produce a model that cannot produce dystrophin & CD38. They followed mice until they were 20 months of age and observed that the mdx/CD38 double knockout (dko) mice were protected against fibrosis and functional deficits.

Authors mention that CD38 knockouts mice have no heart problems or other problems. However, ideally they should have included them in the control groups (we now have wild type and mdx (no dystrophin), but not CD38 ko (no CD38) to reference against.

Authors noted that NAD levels were lower in old mdx mice and back to (almost) normal in the dko mice. No differences were seen in young mdx mice. The dko also had reduced fibrosis in heart and diaphragm and heart and diaphragm function were improved compared to mdx.

Authors noticed a fiber type shift toward type 2 in old mdx skeletal muscle, which was normalized to more type 1 in old dkos. They also observed improved skeletal muscle function in the dkos. However, all this is in a genetic model that does not produce CD38 from before birth.

The question is whether blocking CD38 can also have an effect when it is initiated in a pathologic situation. They first tried short term treatment with K-rhein, a CD38 inhibitor from flavonoids (present in root vegetables and wine). Mice were treated for 5 weeks.

This improved strength but only to a mild level. Authors also treated 3-4 day old mdx/utrophin double knockout mice – which are very severely affected for 3 times per week. After 1 months, function improved, but again only a little. 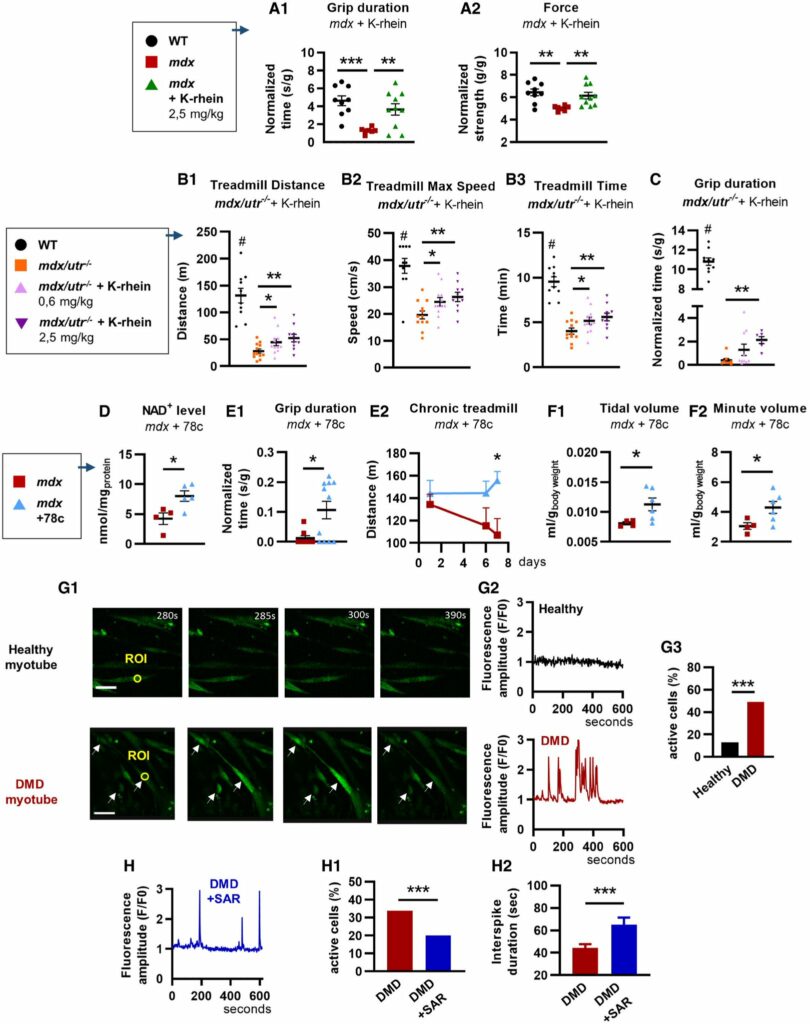 Authors then used 78c a CD38 inhibitor from 4-aminoquinoline (antimalaria compound). Treatment was twice daily from 6 to 15 months. Mice again showed a better performance, even when pathology was exacerbated with chronic exercise. No wild types were included in this experiment.

This means it is impossible to see how large improvement is…Authors discuss CD38 clearly plays a role in Duchenne pathology and that CD38 antibodies are already an approved therapy for patients with multiple myeloma (SARCLISA) and that this could be considered for Duchenne too and that it may have therapeutic impact for other diseases with similar pathology.

So back to the title “CD38-NADase is a new major contributor to Duchenne muscular dystrophic phenotype”. I have problems 2 things:

Of course this is challenging as it requires biopsies – invasive in muscle and nearly impossible for the heart. However, authors should at least acknowledge this before suggesting studies on a therapeutic approach (anti CD38 antibodies) should be prioritized for Duchenne.

For now this is only a treatment in the mdx mouse. More work is needed, e.g. in other animal models to see how ‘major’ the role of CD38 is there. So while I like the approach and the fact that authors did not only test genetic models but also an intervention.

The lack of control groups in several experiments and the overselling of the results have triggered me.