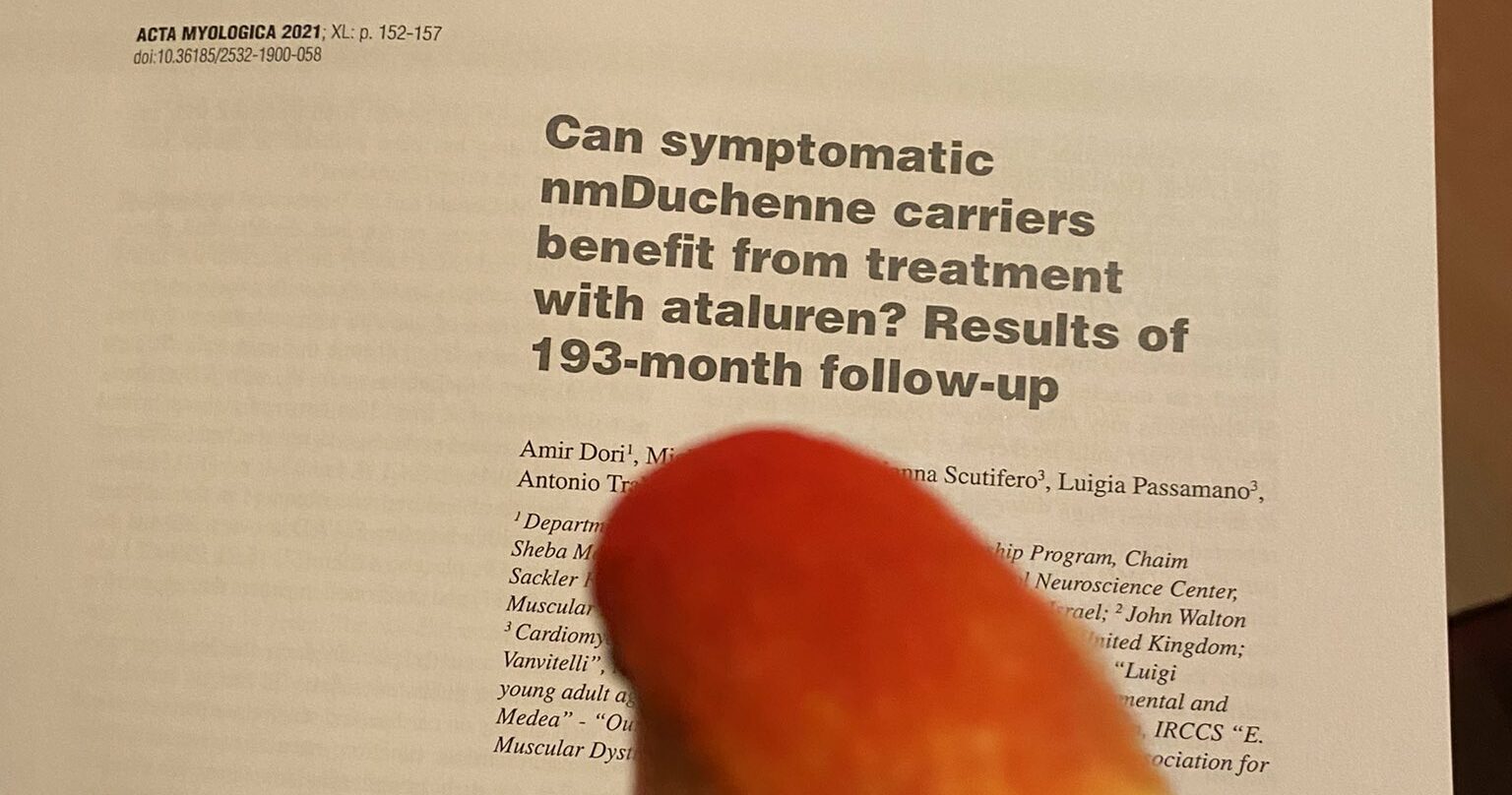 In today’s #apaperaday, Prof. Aartsma-Rus reads and comments on the paper titled: Can symptomatic nmDuchenne carriers benefit from treatment with ataluren? Results of 193-month follow-up & Early treatment with Ataluren of a 2-year-old boy with nonsense mutation Duchenne dystrophy.

First a general introduction about ataluren for both papers: Duchenne is caused by mutations that prevent production of dystrophin. For ~10-15% of patients, these mutations are nonsense mutations, which can be suppressed by stop codon read through drugs such as ataluren.

All other mutations disrupt the reading frame. Here stop codon read through does NOT work. With a disrupted frame you have many stop codons but ALSO the wrong amino acids (AA). So even if read through ignores the stops, you still do not get a functional proteins, because wrong AA.

Back to patients with nonsense mutations / stop mutations. Ataluren has been tested in these Duchenne patients showing the decline in walking as measured with the 6 minute walk test was reduced compared to non-treated in a subset. This resulted in conditional approval from EMA.

We know now that measuring benefit with the 6 minute walk test in 1 year is only feasible within a specific subset with drugs showing small treatment effects. The expectation was that longer term treatment would delay disease progression also outside of the subset.

Post marketing studies done since 2014 suggest a later loss of ambulation and delayed development of respiratory insufficiency: https://pubmed.ncbi.nlm.nih.gov/34791888/ Back to our papers, starting with the Bitetti one on the 2 year old patient. In 2014 ataluren was approved for patients >5 years. In 2018 this was extended to also include patients from 2 years and older. The patient in the case report was diagnosed at 3 months old due to a finding of high CK. Next generation sequencing revealed a nonsense mutation in exon 76.

At age 21 mo the boy showed Gower’s maneuver but no calf hypertrophy. There was a delay in acquiring motor and language milestones. NSAA score was low (but it is known that very young children cannot do all items – even healthy ones). CK was even higher than at diagnosis (15k). When the boy turned 2 ataluren treatment was started. After 16 months of treatment CK is still high, but the Gowers maneuver is gone. The boy walks with a waddling gait but strength is improved. The boy is not on steroids.

NSAA scores also improved. Authors discuss that NSAA scores are expected to improve in very young DMD patients – however, not to the extent found here in this patient (not on steroid with a mutation in the last part of dystrophin gene).

However, the challenge is there is a lot of variability between patients and you do not know how this boy would have developed without ataluren treatment. Furthermore, nonsense mutations in the very end of the dystrophin gene have been found in both Becker and Duchenne patients. Authors state that larger studies are needed to better assess the potential of ataluren in very young patients. I agree but appreciate they share this early work.

Paper 2, from Dori et al is about symptomatic carriers. Some genetic explanation first: the dystrophin gene is located on the X chromosome. Females have 2, males only 1. To avoid overproduction of proteins encoded by genes on X-chromosome, females inactivate 1 X in each cell.

If a mother has 1 X chromosome with a Duchenne mutation, this will be the active X in ~50% of her cells, meaning she will produce dystrophin in only ~50% of her muscle cells. Generally this is enough to prevent symptoms. However, in a subset of carriers symptoms occur. One speculated cause is that the inactivation process is skewed so instead of 50:50, the healthy X-chromosome is inactivated more frequently and instead of 50% dystrophin producing cells a carrier can have only 30% or even less.

For 2 patients the diagnosis was made within 1 year, however, there was a diagnostic delay of >20 years for 1 patient, who presented symptoms at age 1.5. I am highlighting this to raise awareness of this differential diagnosis (symptomatic carrier rather than other MD).

The treatment increased the NSAA values in patients, the time needed to rise from the floor was measured in 2 and increased. Lung function declined. No adverse events were reported. The question also here is of course what the trajectory would have been without the treatment.

Authors discuss the limitations, this is a small group and retrospective analysis. There was no alignment on which outcome measures to use ahead of treatment initiation. Authors state also here more evidence is needed to draw a real conclusion. However, based on current findings, they continue treating the carriers with ataluren. As often the conclusion is ‘more work is needed’. Looking forward to what the future will bring.