Baati et al in Intractable and Rare Disease Research on the impact of high intensity training in d2/mdx mice on muscle force, resistance to eccentric exercise and heart function. They used wild types, off to a good start! 10.5582/irdr.2021.01097.

Lack of dystrophin especially results in muscle fibers being less resistant to eccentric exercise. Results on training in Duchenne patients and mdx mice are controversial – also because different training regimen have been used (difficult to compare). Here authors wanted to study the effect of high intensity training in the d2/mdx mouse that is more severely affected than regular mdx. Authors correctly point out that natural history data for this model is modest at the moment. Authors tested 9 months old mice.

The maximum running speed was determined weekly in mice by slowly increasing the speed of the treadmill until mice became exhausted. Note that this speed will likely vary between wild type and d2/mdx – however, authors do not report about this in the paper. d2/mdx mice were significantly lighter than wild types – both with & without high intensity training. The mass of the tibialis anterior (TA) did not differ between any group. Force and specific force (corrected for weight) were lower in d2/mdx males and females than wild type.

Eccentric exercise resulted in a force drop in d2/mdx mice with & without high intensity training compared to wild type – this was more noticeable in males (see figure below). As authors point out we also observed male d2/mdx to be more functionally affected than females:  https://pubmed.ncbi.nlm.nih.gov/30933664/ 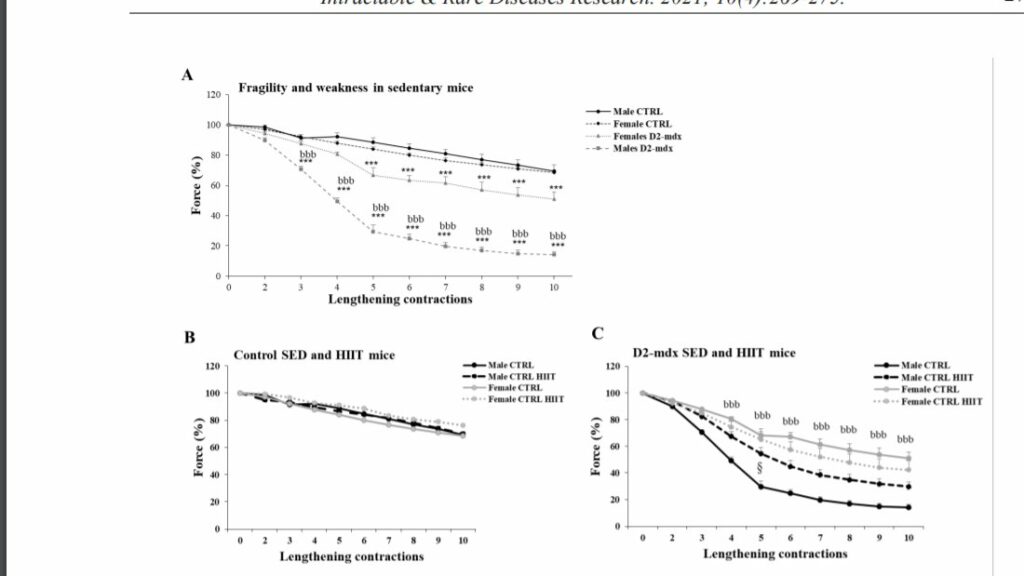 Finally authors looked into cardiac function with echo showing this was reduced in d2/mdx mice in both males and females and both trained and untrained. Note that the exercise regimen was done for 4 weeks, 5 days per week – in wild types this improved heart function. Authors conclude that the study revealed the high intensity training is feasible and safe and beneficial for future implementation in DMD care and management. They should have concluded it is feasible IN MICE. To conclude it is safe I would conduct longer term follow up.

The conclusion that training is beneficial is due to minor delays in force drop and now detrimental effects in the heart. I am not convinced. This could be due to the way results are presented in bar graphs (see figure) that show males and females as comparators rather than the effect of training. 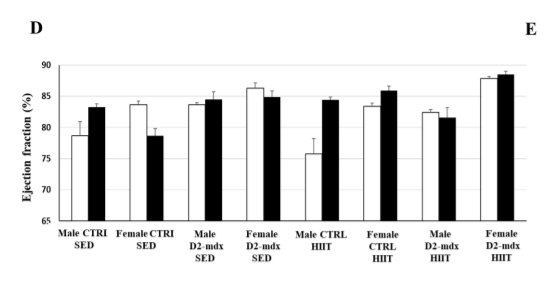 For researchers following #apaperaday free tip: in bar graphs don’t compare what the graph software suggests based on how you organized your data but show the aspects you want to compare. If you want to compare trained vs untrained for different groups, compare that not gender

Back to the paper: I like that there is additional natural history data in 9 months old d2/mdx mice and of course I like that wild types were used. However, too bad the authors did not also study histology but only function – without this I am hesitant to conclude about safety.

Furthermore, the maximum running speed varies between mice – likely it is higher for wild type than d2/mdx, it may vary between males & females. The training is individualized per mouse, which is the point for this type of training, but which may also be a confounder. If the wild type mice had a higher intensity training than d2/mdx it is less surprising the training effect on heart was more visible in wild type than d2/mdx. Authors do not discuss this or mention the maximum running speeds for the different groups though.

So a bit of a mixed bag. Really appreciate authors used wild types, and did not pool males and females and used older d2/mdx mice. However, the paper would have been more complete with histology data and the maximum running speed data.