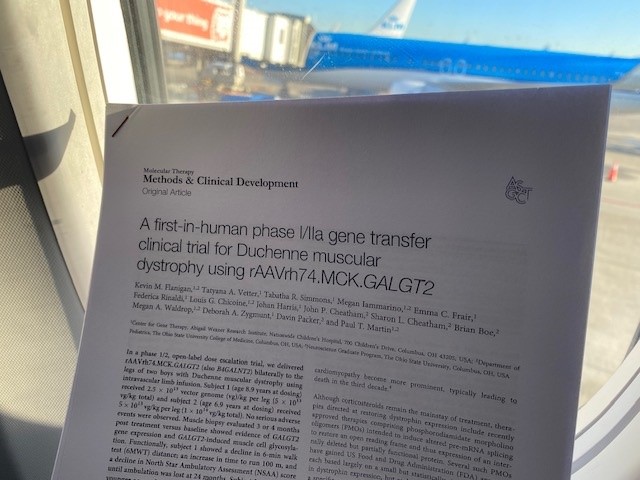 Today’s pick is from Molecular Therapy by Kevin M Flanigan on a clinical trial in 2 Duchenne patients with AAV74 delivery of GALGT2 genes locally to leg muscles doi 10.1016/j.omtm.2022.08.009

Duchenne is caused by lack of dystrophin. Therapies aiming at dystrophin restoration are studied, including adeno associated viral vectors (AAV) to deliver microdystrophin (as full dystrophin don’t fit in AAV).

What does fit is the gene encoding beta-14 N-acetylgalactosaminyltransferase (the protein is shorter than its name). This is an enzyme that glycosylates beta-dystroglycan. The idea is increased glycosylation makes fibers more stable to eccentric contraction induced damage.

In mdx mice and models for other muscle diseases this was indeed shown. In dog models for Duchenne a non significant trend was seen. Here authors tested GALGT2 delivery locally to leg muscles of a 7 and a 9 year old Duchenne patient.

They did not have enough material for systemic treatment and delivered 2.5 *10(13) viral genomes per leg to the 9 year old and 5*10(13) vg/kg to the 7 year old patient via regional intravenous infusion of the legs.

Note that patients with preexisting immunity to the viral vector (AAV74) were excluded (1 patient failed the pre screening due to this). Steroid doses increased for The 2 treated patients but were later tapered down again.

Treatment was tolerated well with most side effects arising from the local treatment protocol, or the steroid increase. Transaminases were elevated already at baseline probably due to existing muscle wasting.

Needle biopsies were taken at baseline, 6 and 12 months. A small increase in GALGT2 levels was observed compared to baseline but results were underwhelming (authors’ words). No change was seen in expression of other proteins.

Authors conclude this is promising for this approach for young patients at the higher dose used for him. However, they stress the number is very small. I think it is too small to draw any conclusions.

Authors discuss preclinical studies are ongoing to achieve bodywide delivery of GALGT2 with higher doses of AAV. From the microdystrophin AAV studies we know this is technically feasible.

However the consideration is that once patients are treated with GALGT2 AAV they can no longer be treated with microdystrophin. We currently do not know if microdystrophin is functional and how long it persists but likely the therapeutic effect is larger than for GALGT2.

We also know there are patients currently not considered for AAV microdystrophin: those with preexisting immunity (also not eligible for the AAV GALGT2 approach) and those with mutations at the start of the gene (eligible for this approach).

I think as long as we do not have a good treatment for Duchenne we should investigate alternatives. However patients and families must be aware of risks and consequences (eg aav trial likely means being excluded from future trials and treatment with AAV therapy).