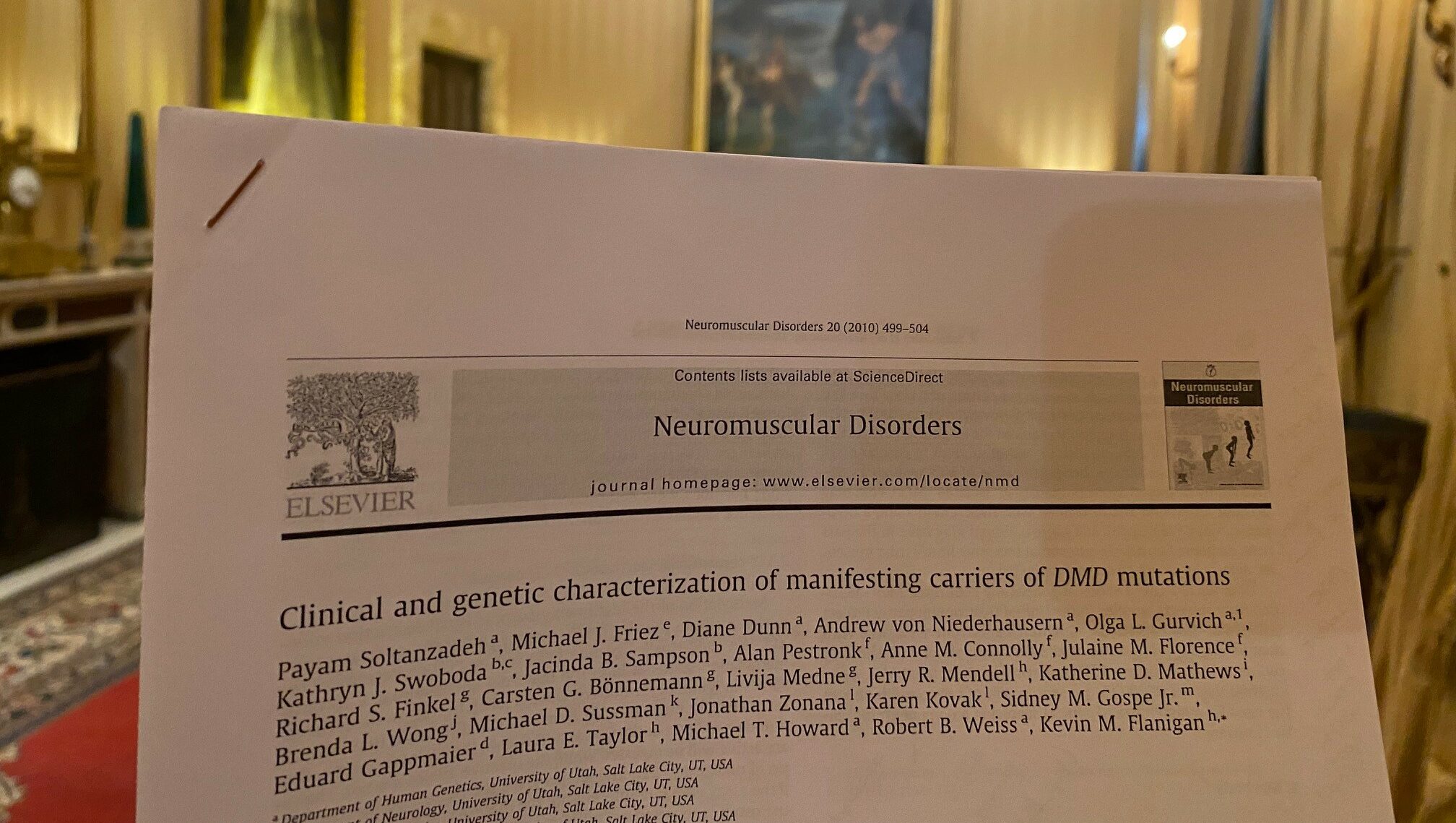 Today and tomorrow we dive into the cause of manifesting carriers starting with a paper by Soltanzadeh et al in Neuromuscular Disorders. Doi 10.1016/j.nmd.2010.05.010

Clinical and genetic characterization of manifesting carriers of DMD mutations

While most women who have a mutation in one of their dystrophin genes do not have symptoms, 2-8% does present with symptoms. The severity of these symptoms varies and they involve mainly muscle weakness and pain. For some manifesting carriers, the severity can be almost as severe as Duchenne.

Two days ago I explained about X-inactivation: when the embryo is in a ~100 cell stage either the X-chromosome of the mother or that of the father is randomly inactivated in each of the cells and that inactivation pattern is then inherited by all daughter cells.

That is indeed what one sees when a biopsy of a female carrier is stained for dystrophin. Furthermore, some pathology is generally also visible: variation in muscle fiber size, centrally located nuclei (sign of recent regeneration) and damage/necrosis and inflammation.

In this paper authors studied how often manifesting carriers occurred in their database. Out of 860 female subjects, 15 manifesting carriers were identified (weakness and myalgia). 8 had a relative with Duchenne, while 7 did not. Of the 15, 5 had dilated cardiomyopathy (DCM).

Authors analyzed biopsies of some of the manifesting carriers and confirmed they had the pathological signs expected. Also the mosaic dystrophin staining pattern was observed.

Authors looked into reasons why these carriers manifested symptoms. For 1 the reason was clear: she carried two mutations in the dystrophin gene – likely one on each of her dystrophin genes. This was a woman who was quite severely affected, as would be expected.

For the other carriers authors speculated X-inactivation might have been skewed. Because the process is random it is possible that instead of 50:50, an 80:20 pattern occurs (or 70:30 etc). When the functional gene is inactivated with a higher frequency than the mutated gene, less dystrophin can be produced is the hypothesis.

Authors looked at X-inactivation in the blood cells of the carriers and found that for 5 manifesting carriers, X-inactivation was skewed while for others it was not. Note that it is possible the X-inactivation patters between muscle and blood cells varies, so their results may not have been predictive for muscle in all cases.

The most important lessons from this paper are that dilated cardiomyopathy is frequent in manifesting carriers. Clinicians should be aware of this. Secondly, women can be a carrier of the dystrophin mutation and manifest symptoms also if they do not have a relative with Duchenne.

In fact, about 50% of the cases discussed here did not have a relative with Duchenne. This resulted in delays in identifying the cause of the symptoms. In fact, one of the women underwent a liver biopsy because her transaminase enzymes were elevated.

These enzymes occur in liver but also in muscle and will leak into blood upon damage of either.

This paper underlines that awareness of women with dystrophin mutation being at risk for heart and muscle pathology is important to initiate genetic counseling and but also to prevent incorrect medical intervention and allow proper medical intervention.