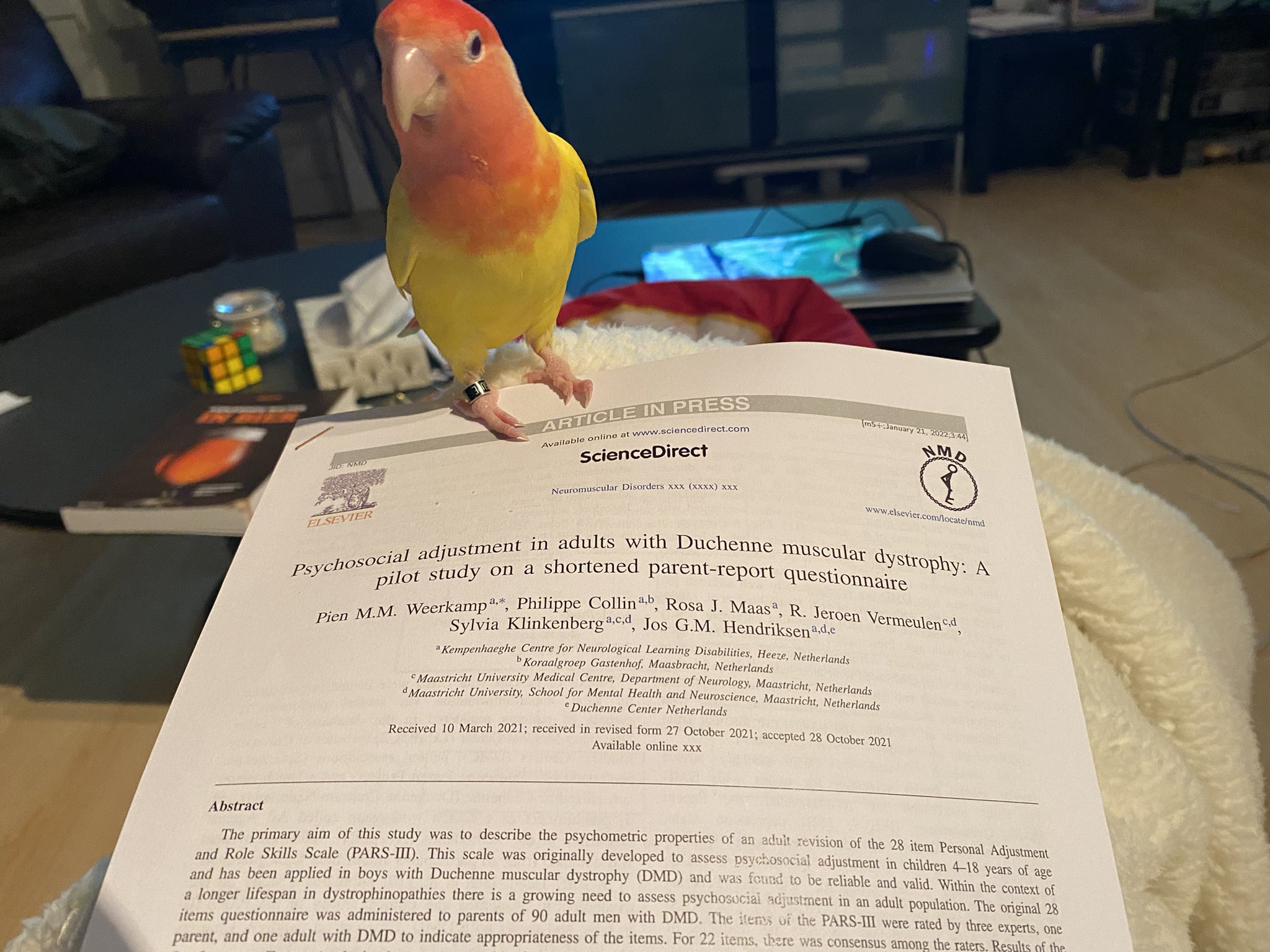 In today’s #apaperaday, Prof. Aartsma-Rus reads and comments on the paper titled: Psychosocial adjustment in adults with Duchenne muscular dystrophy: A pilot study on a shortened parent-report questionnaire.

Today’s pick is from World Muscle Society journal Neuromuscular Disorders by Weerkamp et al on a pilot study with a psychosocial adjustment scale in adults with Duchenne. From Jos Hendriksen’s group, doi 10.1016/j.nmd.2021.10.008

As mentioned earlier, Duchenne is characterized also by cognitive issues in addition to muscle function loss. This is studied in the BIND project in detail as only little is known about the cause of brain pathology and dystrophin’s role in the brain.

When Duchenne patients grow up they rely more on others due to loss of function. The progressive nature of the disease can be a cause of anxiety, on top of behavior & psychosocial issues already part of Duchenne pathology. Regardless, many adults with Duchenne are well adjusted.

Growing up, Duchenne patients appear to learn how to cope with the disease but still experience anxiety when faced with worsening / losing what little function they have left. Standards of care (SoC) advise regular mental health screenings.

Multiple tools are available to test for mental health. The PARS-III (personal adjustment and role skills scale-III) assesses 6 domains: dependency, peer relations, anxiety, productivity, withdrawal and hostility. PARS-III has been used for Duchenne, but is developed for children

As part of care for Duchenne adults (see e.g. this Journal of Neuromuscular Diseases paper https://pubmed.ncbi.nlm.nih.gov/34511509/ psychosocial scales for adults should be available. Authors here adjusted PARS-III for use in adults by removing inappropriate questions resulting in a shorter PARS-A scale (A for adult)

The adjusted scale was validated by multiple Duchenne experts and selection of inappropriate questions was done with input from patients and parents. The work was a collaborative effort of academic centers caring for Duchenne and patient organisations Duchenne Parent Project NL and Spierziekten NL.

The study benefited from the Duchenne patient registry coordinated by Duchenne Center NL with input from academic centers caring for Duchenne (All against Duchenne in the Netherlands). It also benefited from a previous study done by Jos Hendriksen in Duchenne children & adults.

In this study authors used data from 90 adults with Duchenne using only the 22 questions part of the PARS-A. The questionnaires were filled out by the parents (91% of patients were living at home). More information on included patients below. 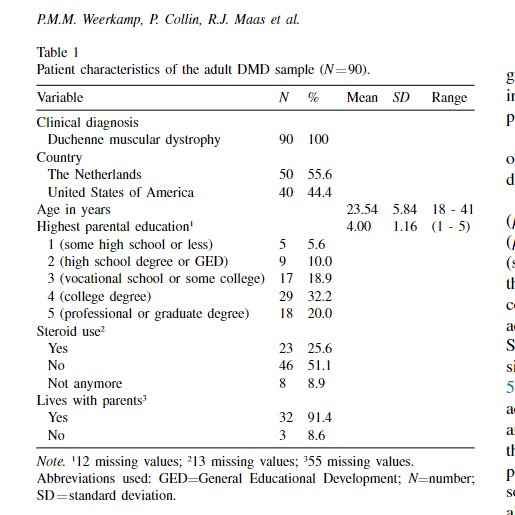 As mentioned authors did their due diligence to confirm the validity of using the PARS-A. They observed that adults have higher scores than children (meaning a better psychosocial adjustment), especially for perceived hostility and dependence.

Improved coping had been reported before, but this is the first study to describe assessment of psychosocial adjustment in adults with Duchenne. The cut-off score below which clinical action needs to be taken is 59.1 for PARS-A (was 72.3 for PARS-III but that has more items).

Authors note that adults with Duchenne have better coping mechanisms despite the progressive nature of the disease. This is something that never ceases to amaze and humble me. Authors suggest using this scale as part of the standards of care for Duchenne adults

Authors discuss limitations: PARS-A was filled out by proxies (parents). This may not be a true reflection of the coping of patients due to the disability paradox (proxies have a tendency to report lower quality of life for patients with disability than the patients themselves)

Authors suggest comparing a self-report with a proxy report for PARS-A (but the self-report does not yet exist). Other limitations are that participating parents were skewed to a higher socio-economic status, which may have influenced the outcomes.

The data used now by the authors were compiled by removing the inappropriate items. However, originally these were part of the questionnaires filled out by the parents and that may have resulted in a negative feeling.