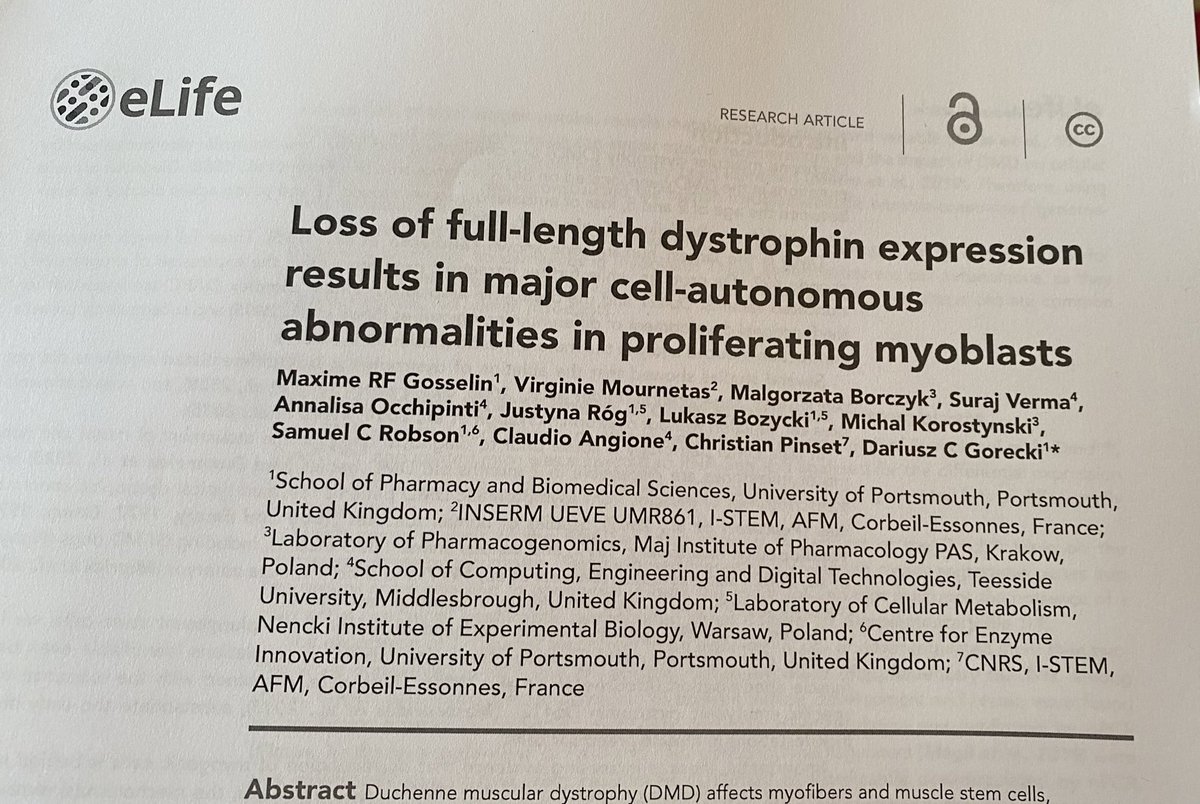 Today’s pick is from eLife Journal by Gosselin et al on a study of proliferating myoblasts from Duchenne patients & controls &  dystrophinopathy mouse models and wild types. The study reveals major abnormalities, so is Duchenne a stem cell disease? Doi 10.7554/elife.75521

Duchenne is caused by lack of dystrophin, which results in muscle fiber damage, chronic inflammation & impaired regeneration, leading to muscles being replaced by fibrotic & adipose tissues. While patients generally are diagnosed at age 4-5, pathology is already present in babies

Authors have previously shown that loss of dystrophin also has an impact on muscle stem cell division. Normally activated satellite cells will proliferate and one cell will go back into quiescence to be ready for the next bout of damage. This process is impaired for Duchenne.

First authors looked into 2 mdx mice and wild type myoblasts. 1 mdx mouse was the regular one (lacking only the full length dystrophin), the other lacked all dystrophin isoforms (mdx-all in this thread). They observed that proliferation markers were increased in mdx myoblasts.

Also markers for extracellular matrix components (such as collagen and other fibrotic markers) were increased. Markers for cell migration and differentiation were decreased. No differences were observed between mdx and mdx-all myoblasts.

Muscle repair has three phases for myoblasts: proliferation, migration (to damage) and differentiation (to repair the damage). Authors confirmed with in vitro studies that the mdx cells proliferate more, migrated less and differentiated differently.

Yes differently, not less, because the mdx mice actually differentiated into myotubes QUICKER than the wild type myoblasts! However, the expression levels of late myogenic markers were reduced compared to differentiated myotubes from wild types.

Authors compared 12 vs 12 patient and control lines and saw similar patterns. They also noted that the metabolism of the patient cells was altered, and they were signed for mitochondria pathology and disturbed energy metabolism.

Authors claim in their abstract that ‘contrary to established belief, disturbances occur in myoblasts’ which makes them a good therapeutic target. This triggered me for various reasons.

They do speculate how this can be, as dystrophin protein is very lowly expressed so how do the cells know to behave differently if what makes them different (dystrophin + or -) is not yet apparent? Authors indicated it might be epigenetic changes.

This could very well be. However, I believe that pathology also plays a role. The fact that there is chronic inflammation and muscle damage, causes production of factors by inflammatory cells and fibrotic cells which impairs regeneration.

Unlike the authors I am not claiming these processes are mutually exclusive – they can be additive. However, authors study the myoblasts in isolation in their cultures, so they will negate any effect of inflammatory cells and fibrotic cells that are normally present in muscle. So they will never see this effect in their system (but that does not mean it is not there).

To summarize, I do not question the results, I’m questioning how they spin it in the abstract (the results and discussion sections are more toned down). Note that the paper contains a LOT of data, so if you are interested in myoblast RNAseq datasets, go have a look.