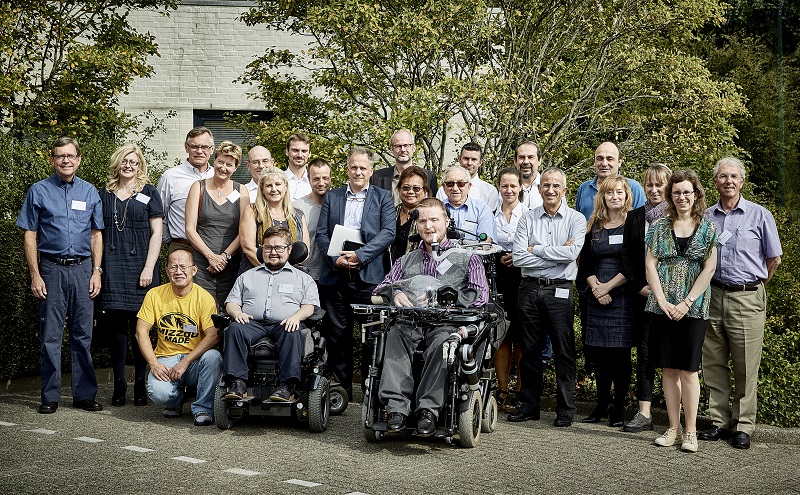 With the courtesy of European Neuromuscular Centre (ENMC), please find here the lay reports of the ENMC workshops related to Duchenne muscular dystrophy in recent years. These workshops were organised and funded by the ENMC.

On September 16, the 223th ENMC International Workshop on AAV microdystrophin gene therapy for DMD was held in Naarden, the Netherlands.

Translation of this report: French

This workshop was co-sponsored by: Action Duchenne, AFM Téléthon and Myocure

The 223rd ENMC workshop entitled “AAV (Adeno-Associated Virus) Microdystrophin Gene therapy: Trial Ready for Duchenne Muscular Dystrophy (DMD)” took place from the September 16th to 18th September 2016 in Naarden, The Netherlands. A multidisciplinary group of 23 persons from 7 countries (UK, USA, Germany, France, Netherlands, Belgium, Iceland and Ireland) attended the workshop, including 14 clinical and basic science researchers, 3 industry participants, 2 patients, and 4 representatives from the following DMD patient organisations: AFM, MDUK, Action Duchenne, Join our Boys and Living with Duchenne. It is unique, since an ENMC workshop on gene therapy for DMD has never been organized before.

The discussions were divided in 4 sessions, encompassing the following topics: background and other examples of AAV gene therapy; preclinical development of microdystrophin AAV vectors; AAV vector GMP production, toxicology and immuno-toxicology; DMD gene therapy clinical trial design and execution. The aim of the workshop was to share, receive, collate and report on the expert opinions in the field on: (i) current ongoing or near-horizon AAV gene therapy trials, (ii) development of AAV microdystrophin vectors, (iii) production and toxicology of AAV vectors, (iv) immunogenicity of AAV vectors and transgenes, and (v) DMD Gene therapy clinical trial design and execution.

Virus-mediated gene therapy applications to restore dystrophin expression are widely considered as a promising treatment avenue to directly address the underlying genetic cause of DMD. Many different viral vectors exist, each with specific properties. Adeno-associated virus (AAV) is non-pathogenic and has been well characterised in pre-clinical studies and in recent clinical gene therapy trials, for example for spinal muscular atrophy and haemophilia.

There are various challenges involving AAV gene therapy both in general and for the DMD gene. Lab-based genes encoding the full-sized dystrophin protein are generally too large to be accommodated into AAV gene therapy vectors. For this reason, there have been a range of so-called microdystrophin genes artificially designed, which are small enough to fit into an AAV vector, and yet retain much if not all of the functionality of the normal sized dystrophin can be discarded without losing much of its function. These approaches were discussed in detail. The distribution of viral vectors to the skeletal muscle, diaphragm and heart to deliver the treatment and expression of microdystrophin was also discussed in detail.

Two types of AAV vectors or serotypes (AAV8 and AAV9) were described for microdystrophin delivery and seem to be currently best suited and practical for DMD gene therapy. These variant vectors and microdystrophins have been studied in the mouse, rat and dog animal models of DMD with significant positive results, in terms of reduced degeneration of muscle tissue, scar tissue, and improved muscle functionality and stability, and improved clinical parameters (movement, gait and breathing). Duration of microdystrophin expression and clinical improvements were observed for at least 2 years after a single administration of an AAV gene therapy vector.

Effective gene therapy targeting widespread muscles has been shown to require relatively large doses of AAV vectors to be administered which challenges production methods and may limit the number of people that can be recruited into clinical trials. Scaling up of AAV vector production from lab-based levels to semi-industrial pharmaceutical grade production takes significant investment to meet the stringent standards related to purity, potency and safety that are required for human clinical trials. Different methodologies to generate the required amount of purified product for DMD trials are currently being evaluated were discussed in terms of efficiency and practicalities of production. The safety of, and immune response to, AAV gene therapy vectors and microdystrophin products were extensively discussed.

While no adverse immunological responses are observed generally in animal studies, prior and ongoing clinical trials in humans have shown that low-level and transient elevations in serum liver enzymes may occur most likely due to immune system reactions to AAV surface protein (called the capsid). Such responses in human subjects have been below the level to generate serious clinical concerns, but have nevertheless been managed by transient mild immunosuppression using steroid drugs (glucocorticoids). It was discussed that any DMD patients recruited into AAV-microdystrophin gene therapy trials will likely be already receiving steroid treatments and that this was considered an advantageous situation although steroid dose levels might have to be adjusted temporarily.

It was also discussed that either due to pre-existing exposure to AAV in individuals prior to gene therapy, or following an initial gene therapy treatment, the presence of antibodies to AAV in patients would present a barrier to efficient re-administration of second and subsequent doses. It was noted that approaches to prevent and/ or circumvent this effect were under development but would likely prove difficult. Discussion of trial designs indicated that they would follow a standard approach in the field with initial small scale safety and dose-escalation studies (Phase I and Phase II), with primary outcomes of safety and tolerability, and secondary outcomes monitoring microdystrophin expression, immune parameters, MRI scans and clinical tests of muscle function.

Due to the unusual circumstances in AAV gene therapy trials where a first treatment may preclude secondary higher dose treatments, it was noted and discussed that in dose-escalation safety studies, careful consideration of the initiating dose, and patient recruitment and ethical consent would be required. A full report of this ENMC workshop will be published in Neuromuscular Disorders in the first half of 2017.

A full report will be published in Neuromuscular Disorders.